Well we had a few glorious sunny days. It really felt like the spring had arrived in force. I suppose I should have used the opportunity to catch up with everything but we headed off to the beach with the grandson and out to some local tourist spots. Of course, the good weather didn’t last.

So the temperatures have dropped and we’re back to more wet than dry which doesn’t exactly make gardening outside pleasant. Still, I’ve got a few things done. 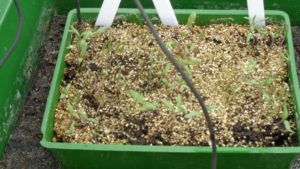 Tomato Seedlings in the greenhouse, These are the outdoor varieties. The wire is the sensor for the propagator thermostat 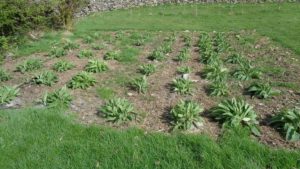 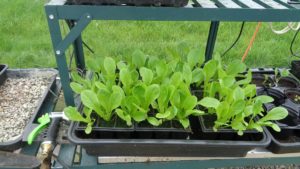 Little Gem Lettuce in Modules ready to plant out now. 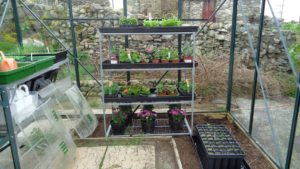 The Flowers on Racks – the battle for space resolved by adding temporary shelves.

My greenhouse tomatoes are doing fine and I’ve sown the outdoor tomatoes which are near ready to prick out and pot up. My onion sets are in and under fleece and the Karmazyn broad beans I started in rootrainers have been planted out. I could have done with planting those a week ago but they seem to have held well in the rootrainers.

The fleece came off the shallots and garlic which are both looking well despite the hot / cold cycles we’ve suffered. We’ve actually lost more plants this winter than we did in 2010/11 when it fell to minus 15 at one point. It’s because the plants were fooled that spring was arriving and then the temperatures plummeted again. On one bed the chickweed was trying to swamp the shallots so I that was ‘harvested’ for the chickens.

The comfrey is coming back but it needs a bit of weeding, Then I’ll lay cardboard around the plants and mulch with grass clippings. Hopefully it will stay dry long enough to get the grass mowed. I still haven’t got the potatoes in – nearly a month behind plan there but better to bend with the weather than be broken by it.

In the greenhouse I’ve a lot of little gem lettuce seedlings which are near ready to plant out. Far more than we need but the chickens will make use of the surplus. The great marital battle has ended in peace. Val erected some extra shelving so the flowery things can be brought on in the greenhouse. By the time I need to plant out the tomatoes and aubergines in there, the flowers will be going outside.

Up in the polytunnel I harvested the last carrots. We’ve not had a bad haul from a small space. My experiment with growing brassicas in the tunnel has been informative. I don’t think it is worth growing brassicas in a polytunnel – they don’t seem to do any better than outside and the cabbages were prone to bolting. Still, I know now and I’ve got a lovely cauliflower as well. 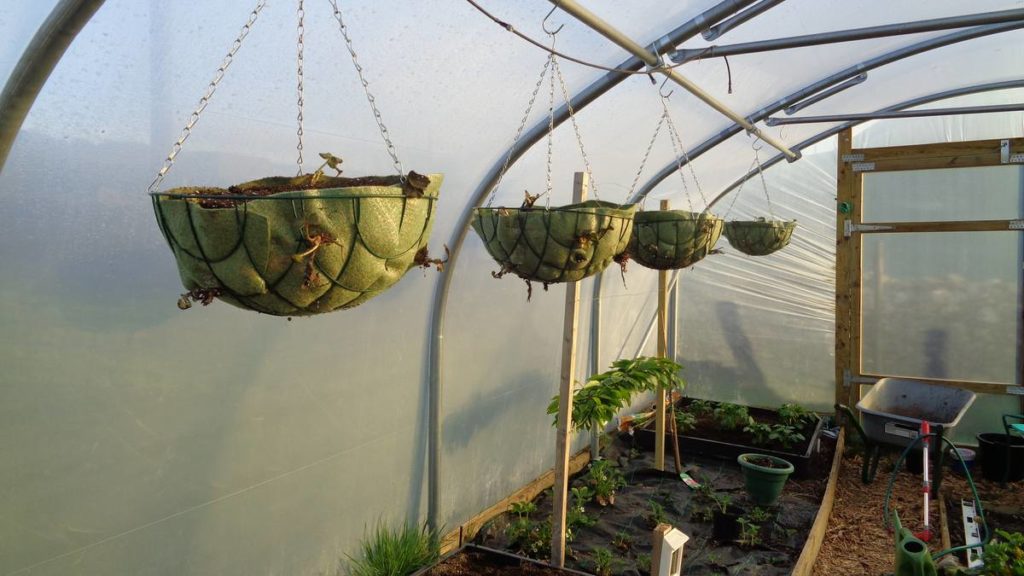 Strawberries in Hanging Baskets in the Polytunnel

I wanted to make better use of the space in the polytunnel and had thought to hang some shelves and then grow strawberries in grow bags but I’d have ended up with the shelves overhanging the paths. Head banging! So I’ve gone for hanging baskets.

I’ve got some large hanging baskets – 16 ins. Diameter – which are hung with S hooks from the side bars. The First Tunnels Polytunnels are so well engineered that weight isn’t problem. The first thing was to mix a compost for them. I used a standard multi-purpose compost to which I added perlite to keep it open (1 part perlite to 3 parts compost by volume) and added water retaining gel.

The liners have 6 segments with 2 slits in each segment so 3 plants in the lower slits and 3 in the upper, alternating segments. Then 3 plants in the top above the lower plants. This gives me 9 plants per basket.

I’ve gone for Flamenco strawberries, an everbearer that is ideal for baskets and pots. Hopefully we’ll be getting some decent crops from them. I may have been better to not plant the 3 in the top of the baskets but time will tell on that.

There’s enough feed in the compost to get them started and in a month I’ll start feeding. Initially I’ll use Miracle Gro to really boost growth and then move on to a tomato feed like comfrey liquid. 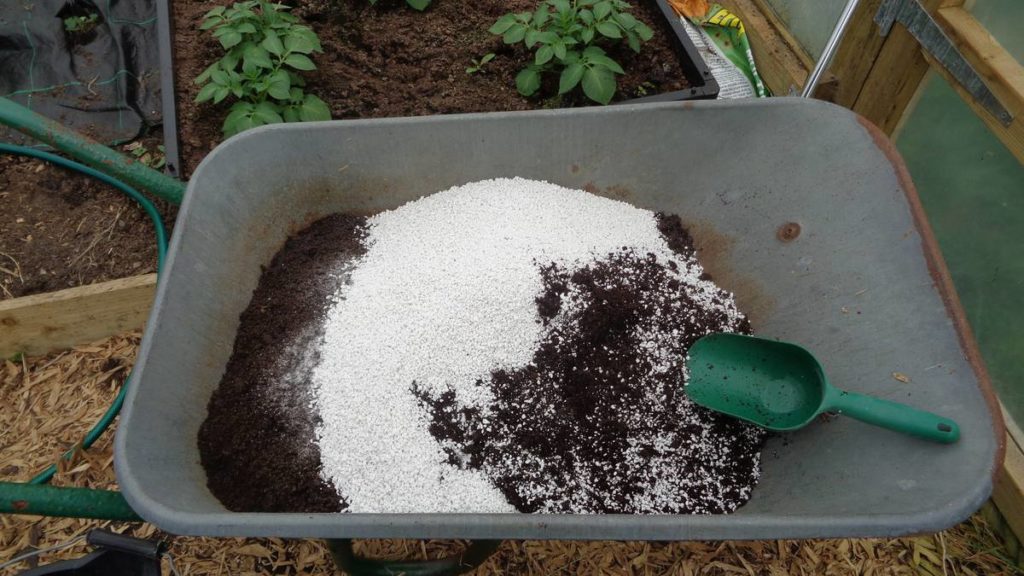 Mixing Compost for the Strawberries 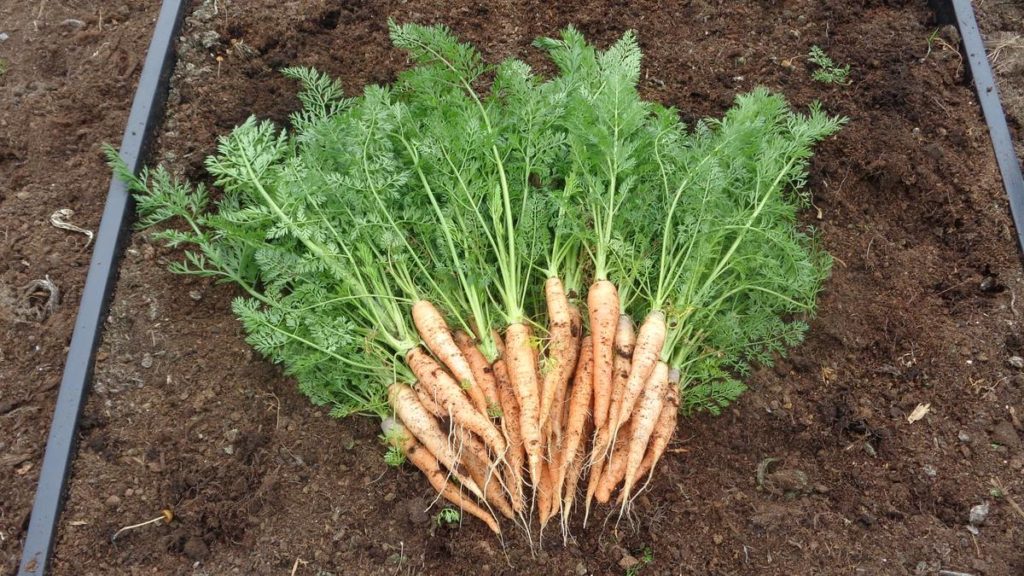 Last of the Carrots in the Polytunnel 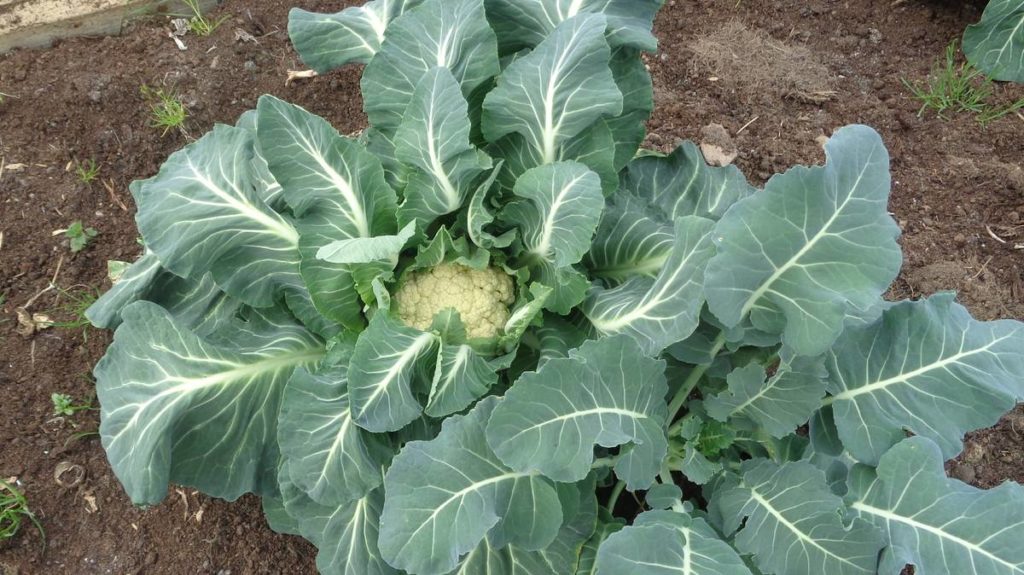 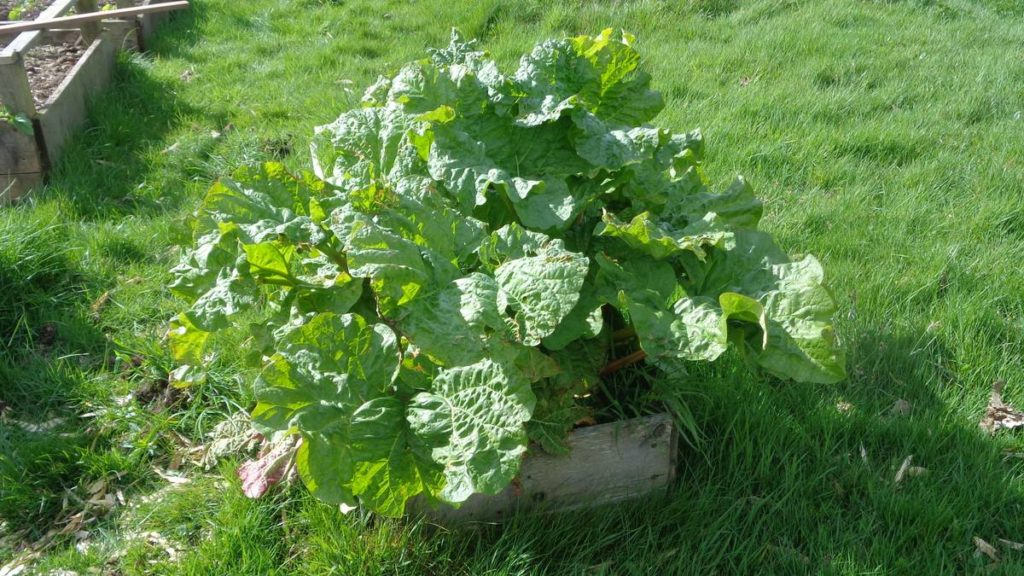 2 comments on “Strawberries in Hanging Baskets”