After Wednesday’s monsoon, except it was a cold monsoon, Thursday dawned sunny, freezing cold but beautifully bright and sunny. My neighbour’s light was off in the sheep maternity-hospital shed so I assume he must have got to bed sometime after 3am when it was still on as I went past my window.

Being as it was windy as well as cold, one of those winds that cuts straight through windproof jackets, I thought it best to catch up on the sowing plan in the potting shed. Now there’s been a few changes to the plan which I’ll cover as I go.

Changes to the sowing plan

The plan was to sow 3 varieties of sweet peppers but, as was pointed out to me by the boss, that was a bit of overkill, so I’ve just sown Jumbo and Redskin. The Mohawk will be for next year, unless either of the others fails.

They’ve not been started in modules, either. I’ve sown the peppers in 3½ in. pots and should be planting them out from there into the polytunnel. Last year peppers did really well in the polytunnel. 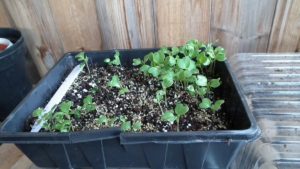 I really like Hispi as a cabbage; they’re fairly fast growing and small. Giant cabbages are all very well but a monster sized cabbage is a bit much for the two of us. The plan was to sow some Hispi but then I realised I’d already got some seedlings as part of my microgreen growing experiments (more on those to come soon). All I needed to do was transplant some seedlings into 3 in. pots.

Now I’ve transplanted 30 plants which may seem a lot but most of them are destined to feed the hens. They love nothing more than pecking away at a cabbage hung in the run. The more it swings around, the more they like it. Brave chickens hunting the elusive vegetable! 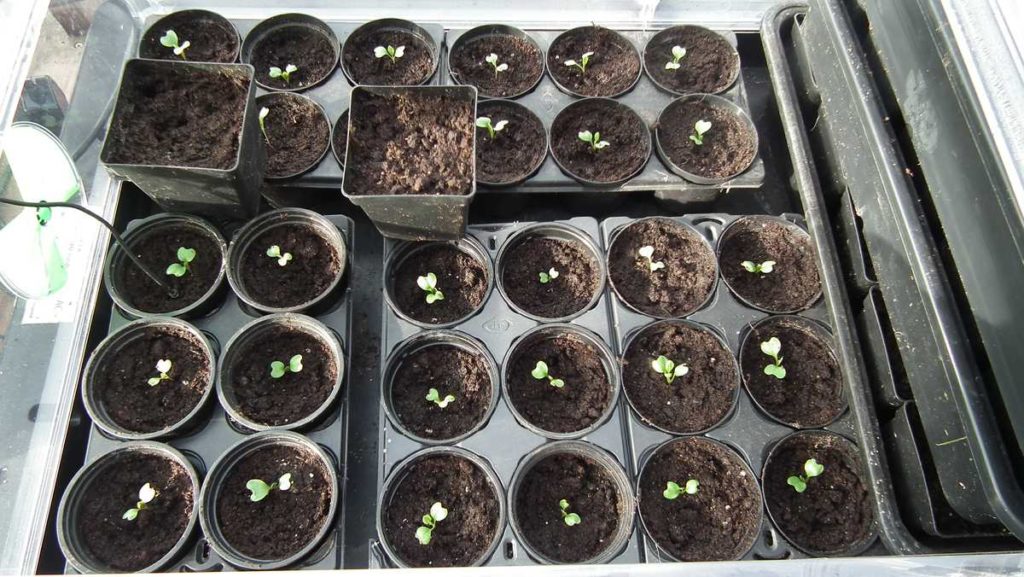 Hispi Transplanted into Pots in Vitopod

I had planned on sowing those in paper pots but, having had a number of emails on the subject of getting parsnips to germinate,  decided to use root trainers  instead. Just 2 sets of the root trainers have 64 cells between them which, if they all work, is plenty of parsnips. 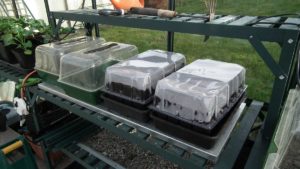 Before sowing them I soaked them for a couple of hours in a solution as per James Wong’s parsnip germination tip  . I thought about pre-germinating (chitting) them but after soaking it seemed a bit redundant. I’ve sowed about 3 seeds per cell and will thin to the strongest.

Having run out of propagator space in the potting shed, the root trainers went into greenhouse with perspex propagator lids on the TwoWests quadruple seed tray variable temperature  propagator base. I set the compost temperature at 20ºC which, in theory, should give germination in 14 days. As they’ve been pre-soaked I’m hoping it will be faster.

I’d not got as many Bedfordshire Champion seeds as I thought so just one 24 module tray of those in the Vitopod set for a minimum of 15ºC along with a half tray split into 6 modules of Ailsa Craig. 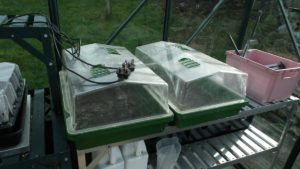 The rest of the Ailsa Craig onions have been sown in deep modules, a bit like root trainers, I found in the shed. They’re half-tray sized with 9 modules each. The thing is they’ve had to go in the old propagators in the greenhouse and half-trays fit in much better with little wasted space.

I’ve upgraded the propagators from fixed temperature to variable by running the power through a thermostatic control with a probe as used by the Vitopods. The temperature is set for 15ºC. I’ve got 5 half-trays per propagator, giving 10 in all – 90 onions if all works out.

I had planned on sowing some Long Red of Florence onions, which are more like a shallot but I’ve got shallots in and autumn planted onions plus some sets to go in later so I think I’ll reserve those seeds for next year.

Next on my list is to make some alterations in the polytunnel and plant some first early potatoes. That job will have to wait until Saturday though when hopefully it will be a little warmer.