I’ve been meaning to build some cold frames since we moved but somehow I never have the time. One of those jobs I’ll get around to but never do. There’s always more to do than time to do it – then again, it’s better than being bored. 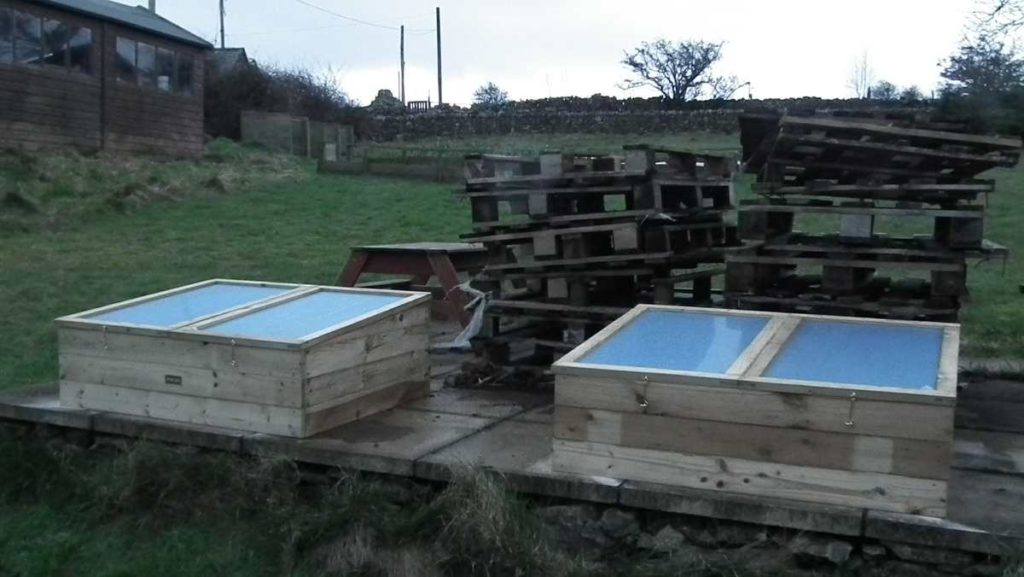 My new cold frames, built and fixed to the base. The pallets are an optional extra!

Coldframes are immensely useful, a sort of half-way house between a greenhouse and the outdoors. Great for bringing on plants that could be outdoors but will do better with a little shelter. They’re useful for over-wintering plants that aren’t hardy enough for a tough winter as well.

Cold frames are most useful when moving plants from a greenhouse to the great outdoors. You can harden the plants off without moving them in and out of the greenhouse – just open the cold frame lid in the day and close it at night until the plant is toughened enough to go out.

So I was really pleased to get not one but two wooden coldframes from a closing down sale. They didn’t take too long to build, a couple of hours, but because of our strong winds I needed to make a couple of modifications. They’re a fair size – 1 metre by 80 cm deep (3’3″ x 2′ 7″) so plenty of room.

First I used some L shaped brackets to fix them to the concrete base. They’re on the base that I had the first greenhouse on (the one that the wind destroyed). They weigh a fair bit but I know the power of our winds and don’t want them to blow around. The second modification was to add latches to the opening lights which are glazed with plastic so very light – to stop them blowing open and probably getting ripped off their hinges.

I’ll be sowing some broad beans (Aquadulce) in pots soon and as soon as they show I’ll move them to the coldframes until I can plant them out. They’re very hardy but germination will be better in pots rather than the cold and frequently waterlogged soil outside.

How to Build a Cold Frame – Build your own coldframe for free, or very cheaply at least!

A Simple Tip to Get More from a Cold Frame