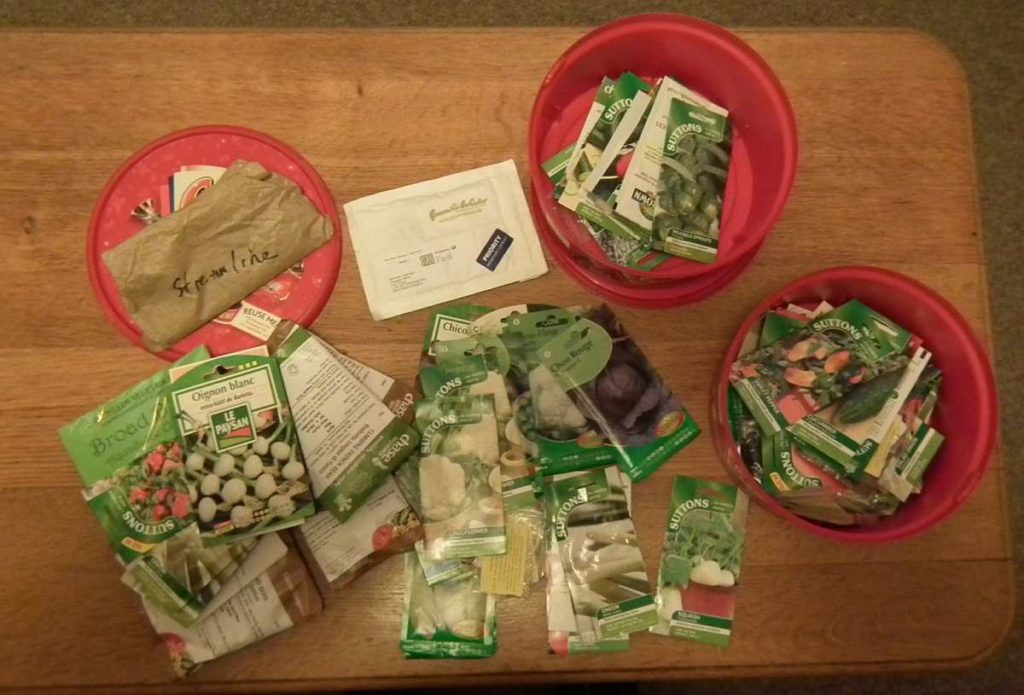 Well a little late (what’s new?) I’ve sorted out my seeds. Partly I can blame the bulk deliveries from Suttons that gives me the seeds to give away with our books but part of it is I’m loathe to throw anything away that might come in useful. That includes outdated seeds.

I actually managed to throw some away but the unopened packets of spring onions that should have been sown by 2011 came back out of the bin. I can try sowing one pack and see what happens!

The rest were listed including my best guess as to viability. In date seeds are Good, very out of date Poor and not sure in the middle. I still needed to buy some seeds; parsnips just don’t keep beyond date for starters and I’ve run out of chard.

I also found some air-tight tins to keep the seeds in, away from damp. You see, never throw anything away that might come in useful and Christmas sweet tins fall into that category. The Celebrations tins are actually designed to be re-used. Apparently they’ll work in the microwave and the freezer. I think that’s a good idea that makes sense.

I’d got some seeds that I’ll never use before they’re useless – including some packs of cabbages and lettuce from 2011. They’re hermetically sealed and have been kept cool so there’s a good chance they’ll still germinate albeit not a high percentage.

These have all gone into another tin and I’m going to use them to play about with microgreens. Or carry out experimental comparative trials on different microgreen growing methods if you prefer. There’s a bewildering amount of conflicting advice around on growing them.

Now I know they’re extremely trendy amongst the fashionable folk but I can’t say as I’m that keen on eating microgreens. Mustard and cress on egg from day trip sandwiches was enough to put me off the idea for life! Picking bits of greenery out of my teeth all afternoon.

However… I’m sure the chickens will appreciate them. At this time of year when rain keeps them in their covered run more often than not, some greens are appreciated. This year I’ll be growing more cabbages with the hens in mind. Hanging a cabbage up in the run keeps them entertained as well as feeding them. 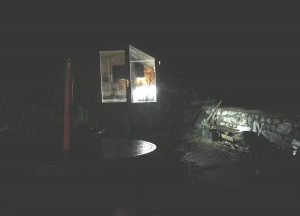 The potting shed shining with the light from the Vitopod at around 6.30pm on a very dark, damp night. 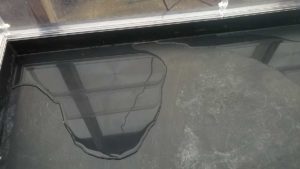 Water Leaking in to the Vitopod

Now at this time of year when warmth and daylight are in short supply, the Vitopods and grow lights come into play. This is where the problem with the potting shed comes in. It’s developed quite quite a bad leak through one of the opening windows and I can’t pin down exactly where it’s getting through.

I’ve had comments in the past about my electrics in the shed which I insist are safe if care is taken not to water them. But you can see the problem, water dripping down onto light fittings is asking for trouble.

Being stuck I thought the best thing to do was to ring the manufacturer and ask if they’d come across the problem before and had any suggestions as to a solution. I was happily surprised when they said they’d call over next time they had a delivery in the area and take a look to identify and fix the problem.

They were obviously concerned and wanted to find out the cause in case a design tweak was needed. Much kudos to a company that takes after-sales service as seriously as selling the product. Swallow Greenhouses.