Having decided that 9 was far too many varieties of potato to grow after last year, this year I’ve really cut down.. to 7 So much for self-control! 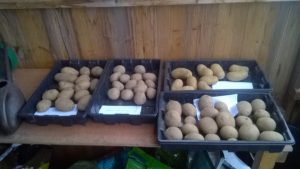 Chitting Potatoes in the potting shed. Arran Pilot left, then Home Guard, Charlotte at the rear, Orla at the front right.

First of all was a ‘banker’ – that is a variety I can bank on – Arran Pilot. It’s a good tasting first early that, if left, grows on to maincrop size. It doesn’t store like a maincrop but it can be harvested as required whilst growing on.

I’ll start in mid-February in the polytunnel in a raised bed. The rest of the seed potatoes should be planted in mid-March. The outside plantings being subject to weather, of course.

The next variety is a second early, Charlotte. It’s a good standard salad potato and usually performs well, so another banker. They’ll go out mid-March as well.

My third variety is another early, but not one I’ve grown before. When I saw them in the garden centre, in view of my researches into wartime gardening I really couldn’t resist. Home Guard. Introduced in 1942, the name was a clever marketing ploy or a tribute to the men depending on how cynical you are.

It became a commercial success after the war which is a good sign and it’s said to be very early. I’ll plant some in the polytunnel as well as outdoors and compare with the Arran Pilot

My fourth variety is one I haven’t grown for some years, Orla. It’s a decent spud described as both an early and an early maincrop. It does have some blight resistance although it’s not in the Sarpo class.

I’ll plant out as per an early and then cut off the haulm at the first sign of blight, harvesting a couple of weeks later. It’s a decent cropper but it does seem particularly vulnerable to slugs, a major problem here.

Usually I’ve controlled slugs with Ferric Phosphate pellets but it might pay me to use nematodes this year. We’ll see.

The above are all chitting in the shed now but the next three, all from the blight-resistant Sarpo family have yet to be delivered. I’d only intended to grow Mira from the Sarpos this year but our garden centre wasn’t offering them. They have for the last years but I think they may have changed their wholesaler.

I had to buy my Orla online as well. I don’t really like buying potatoes online as the transport really bumps up the cost but Sarpo have yet to become standards which is a shame. 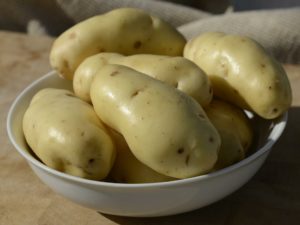 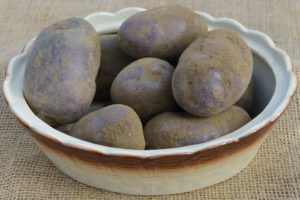 I can understand it with Sarpo Mira, it’s unusual being such a dense potato and many people don’t like it. We find it great for dishes that take slow cooking as it holds together well and it makes a great mash.

Blue Danube isn’t very resistant to blight on the foliage but has good tuber resistance so whilst it may develop potato blight on its leaves just as it is reaching full maturity but still give a good harvest. It’s a good roaster and chipper that stores extremely well too.

Kifli is a waxy salad potato, great as a boiler, that has good blight-resistance along with general disease resistance. It stores well too. For more information on Sarpo potatoes see the Sarpo Website

Assuming the rest get planted outdoors around St. Patrick’s Day (17 March) the harvesting schedule should be as below:

I’ve popped them all onto a spreadsheet so all I have to do is fill in the actual planting dates to get my projected harvesting dates.

So that’s the spuds sorted for 2018. I’m hoping for full self-sufficiency in potatoes this year but much will depend on the dreaded blight which loves our mild but humid climate here. And the slugs, the Devil’s spawn sent to torment gardeners.

Leave a Comment Here on Planning Potatoes for 2018 Cancel reply