Rain at last – but not much

July’s heat wave finally abated and August started with normal British summer weather, cool and raining. Unfortunately not enough rain as I saw on my visit to the plot today. The soil is still quite dry but there has been enough rain to keep the cops going and to generate a flush of weeds.

I’ve not been down to the plot since Sunday so I was a little concerned about what I would find. Would the bean teepees still be standing? The answer was yes, but the tiny immature courgettes have transformed into small marrows. Luckily we have some nice marrow recipes on the site I can try out. Strangely, the marrows are not particularly big, despite being on the same soil and getting the same fertiliser.

The bean teepees are still standing but there’s not a huge amount on them. I did get a picking of runner beans but the French climbing beans are doing better than the runners, which is normally reversed. So a good half carrier bag of Cobra and a quarter of Blue Lake.

The Valor are looking pretty feeble, so they got about three ounces of fish, blood and bone watered in with about half a gallon of comfrey tea per row foot. Hopefully this will improve the eventual yield,

Picked a really good, straight enough for an EU inspector, cucumber from plot 29. 15 inches in length and the subject of some ribald comment that I’d best not relate! 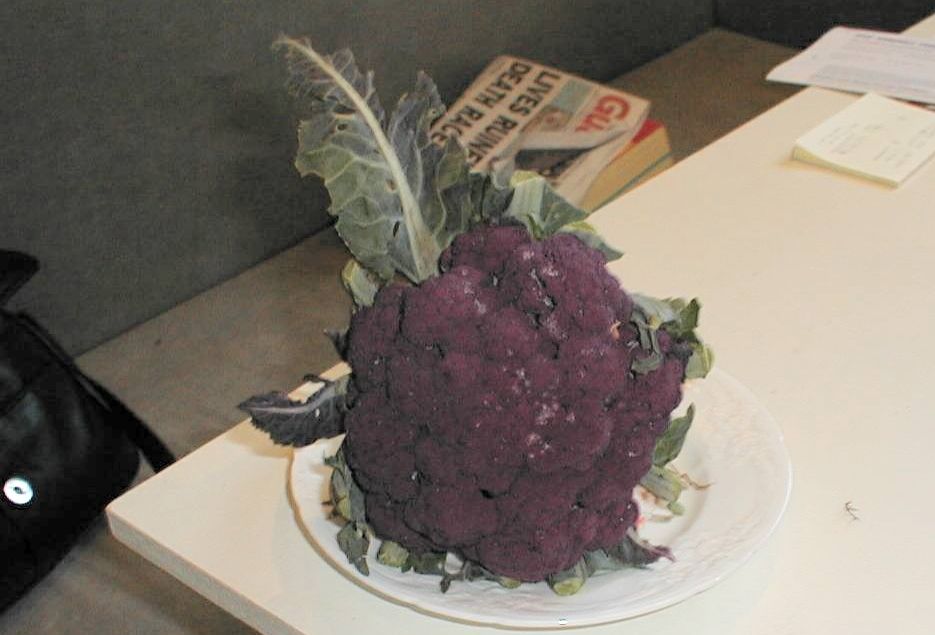 I thought I’d lost all of the first planting of cauliflowers but one of the Purple Graffiti cauliflowers has come through for me. It’s not huge, but a reasonable size anyway. Most impressive. I showed it to a couple of people on the plot and explained, with a perfectly straight face, that it was a new Russian variety, developed in Chernobyl. No one actually fell for it.