No sooner had storm Abigail gone past when storm Barney arrived with a vengeance. 60mph winds were replaced with 80mph and there was hardly a break in the rain. Even for here it’s been pretty extreme.

Tuesday we had to go to the dentist in Criccieth and the sea there was just incredible, huge white topped waves rolling in one after the other in an endless line. Afterwards we went to the bank in Porthmadog and then popped into Tesco for a few bits. As we were leaving we spotted a pallet outside with 20 litre bags of Westlands compost reduced to 48p.

Some quick calculation told me this was a real bargain. The best deal locally on compost is three 70 litre bags for £10. The Westlands worked out at half that! So 42 bags, 840 litres of top quality compost went into the car. That’s what I call shopping!

The rest of the week has just been awful. Even when there’s been a break in the rain, the wind is cutting. I thought about going into the greenhouse but didn’t dare open the doors in case the wind gusted up and pulled a door off! 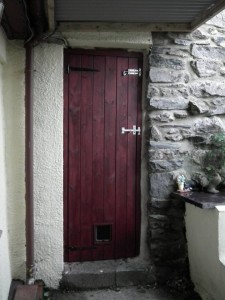 Saturday was sneaky. It started with sunshine and blue sky when I awoke which tempted me out. Since it was pretty cold, put my cold weather togs on and the sky darkened. Oh well, I thought, I can still get a few bits done out there. So, finished my cup of tea and opened the door only to see snow coming down. I’ve a vision of the Welsh weather god laughing himself silly!

Still I’ve been keeping busy to say the least. I’ve a big job on with a web site which is taking up a lot of time and my pal the Bryan the Builder popped over and put a door on the side entrance to the old cow shed. There had been a door there at one time but all that remained were some marks on the wall to show where it had been.

He basically built and fitted it and I finished off putting the furniture on it – a latch and a bolt plus a cat flap- and nipping out between the rain managed to get two good coats of preservative stain on it. Not only does it look well now but it won’t rot.

The cat flap is because we get the odd feral cat around seeking shelter in winter. If they come into the house it often ends up with fighting as our cats drive them away. If I pick up there’s one about, I’ll put food out for him. 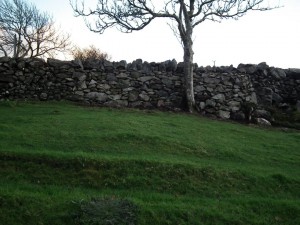 I’ve also had the dry stone wallers in. Dry stone walling is one of those jobs that doesn’t look difficult at all. Heavy work, for sure but it can’t be that difficult sticking one stone on top of the other.. or can it?

The fact is that it is one of those jobs that needs a lot more knowledge and skill than you might think. The builders have this uncanny ability to look at a pile of rocks and select just the one they need to fit a gap. They get the base right to start and then inter-lock large stones across the wall as well as along it. They wedge these in with smaller stones and fill the centre space with shrapnel.

It’s amazing how much damage sheep can do to walls, particularly the Welsh breeds. They jump onto walls knocking off a stone or two. One follows another and pretty soon half the wall is down. Then they decide to ignore gap where you want them to go through to the next field and make their path over the damaged wall. Pretty soon the wall is just a pile of rocks spread around.

Part of the wall that runs by the track was falling down due to water running down the track eroding the base so they’ve rebuilt that for me. The other wall they’re mending is purely due to the sheep. It forms a boundary to an area I want to turn into an orchard. There’s quite a lot of walling I’d like repair or rebuild but just can’t afford to. When we moved here we knew we had some expense with repairing the buildings and the track. What we didn’t expect was those repairs to cost what they did, about three times what I expected. That ate up the reserves in no time.

And I never even thought about the stone walls. These urgent repairs are going to cost about £500 and to get everything done I’d like to, well I’d need to win the lottery as we don’t have £5,000 hanging about. It may be the good life, but it ain’t a cheap life!

The good news is that the walls, once properly repaired or re-built should outlast us. They may need the odd stone putting back up but otherwise they’ll last a lifetime.