Following on from my previous post on Food Waste – some more thoughts on food waste that led me to think about how we produce food here in the UK and it’s eventual end. 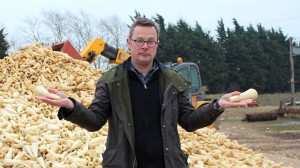 The food waste discussion continued following Hugh Fearnley-Whittingstall ‘s second programme on BBC1. Hugh dramatically emphasised this by standing in front of a mountain of parsnips that fell outside of the supermarket’s cosmetic standards and one telling clip of a tractor turning carrots back into the soil. There’s more about this on his WasteNot web site.

30% of our food production is grown to be waste

Estimates vary but generally the agreed figure is that 30% of fruit and vegetables grown in the UK are wasted, they don’t make it onto the supermarket’s shelves. Add in the food dumped by the supermarkets and by us, the consumers, that’s perfectly fit to eat and I wouldn’t be surprised if the true waste figure overall is 50%.

Now I’ve never been an organic fanatic, I believe chemicals can have a place but the big arguments against organic farming have always been that it is less productive and more labour intensive. It’s too expensive for the masses and besides, we can’t produce enough organically, so they say.

The big benefits of organic growing are sustainability and safety. Sustainable means an improvement in the environment, a growing system that adds to the planet’s capital. Safe in that we’re not ingesting a cocktail of chemicals, many of which never existed before.

A rational answer to over-production

It strikes me in any rational society, we’d opt for less volume of production grown in a more sustainable, safe way and stop growing for the bin. And the additional labour would be creating jobs on farms or opportunities for small scale, even home surplus producers. When we pay people to sit on the dole, creating jobs and opportunities can’t be a bad thing.

Inevitably there will be waste and one clever way of recycling this waste is using an anaerobic digester. Like all good ideas, in essence it’s simple. Organic waste, which could be anything from slurry from a dairy farm to green waste and food waste is composted in a tank. This produces methane gas which is burnt as fuel to generate electricity. Once the process is finished, the remaining compost material is returned to the land as a valuable compost and fertiliser.

The economics of this don’t work though. The cost of the plant and the labour of filling it with organic material are greater than the value of the electricity it produces. So the government steps in with a subsidy and pays a feed in tariff. This makes the plant financially attractive, which is why the UK has over 250 plants in operation now.

The investment required for a typical 300kW installation is around a million pounds but the payback period is around 7 to 10 years. That’s 10% plus, a lot better than most investments.

That sounds great until you realise the subsidies are high enough to make it worth some farmers growing biomass such as maize to go straight to digester. Maize growing has environmental issues of its own. Unless very carefully managed (on a farming scale) it can cause soil erosion. And all this takes land out of food production which isn’t so clever.