From Greenhouse to Compost

Friday the weather was back to normal, breezy and wet, but there was a break in the afternoon which we took advantage of. Val planted a climbing rose in a tub to go up the trellis on the south wall and I headed for the greenhouse.

The Cherokee tomatoes were finished so the plants got cut up and put into the composter. I’ve still a fair few tomatoes ripening on the other plants which I reckon will be a couple of weeks. The peppers, both sweet and chilli, are growing and ripening fruits still as well.

The big surprise is the aubergine. All of a sudden it’s set loads of fruit now it’s too late for them to develop. Maybe I treated it too well, fed it too much because it’s only since I stopped feeding that it’s set all these new fruits. To ensure the ones further along actually mature before winter bites and the plant dies, I’ve removed the flowers and just-set fruits so the energy will go into the fruits with a chance. 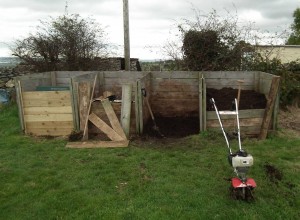 The prediction for Saturday was wind and rain all day but in the afternoon it brightened up with patches of blue and even some sunshine so back outside for a few hours. Planted another 11 willows as part of the shelter belt, which leaves 3 more to plant. Apparently these are bio-fuel willows that should grow really quickly.

Now I know just how easy it is to propagate willows, next year I’ll take a load of cuttings from the goat willows. I really need to get more hedging and windbreaks established to develop the improved micro-climate I need to grow what I want here.

Sunday’s forecast insisted that there was only light cloud but the sky felt otherwise and down came the rain. Monday, however, started out being lovely with sunshine breaking through. The only problem was it was really windy.

Went out and planted the last of the willows, that’s 22 planted in all. Right, I thought, quick cup of tea and then back out to mulch them. So, with the tea drunk I went back out and it started raining. Battened down the greenhouse as the wind was gusting to around 50mph and back indoors.

Wednesday wasn’t too bad but I had some other jobs to do so only got an hour outside before it started to go dark. I hate these dark nights since the clocks changed. That night the wind got up and just before midnight I went out to double check the greenhouse was properly storm-secured. As I got to it a frantic miaow, miaow was coming from inside where our blind cat was trapped.

The silly kitten had sneaked in, probably to munch cucumber leaves, and hidden herself. How a blind cat knows how to hide herself, I don’t know but she does. And why she eats cucumber leaves is another mystery. They can’t be good for her so we discourage it. Anyway she was happy to be rescued and cuddled.

Thursday started with rain but cleared in the afternoon so I finished mulching around the trees with the bark chippings. They’ve all been used up now but I’m going to get another load soon. The paths between the raised beds are rotting down and could do with another layer putting on.

Nearly finished sorting the compost bins. I’ve 4 large bins, 4 feet square each. One is near full of partly rotted down which I expect will be ready to use next spring. One was started two weeks ago and has already shrunk by half. One is about a third full of ready-to-use compost which will mainly go onto the raised beds that have green manure and leeks in at the moment. The last bin that I’ve nearly emptied also has finished compost but there are clumps of compressed grass clippings in there and the compost itself is quite compacted at the bottom. 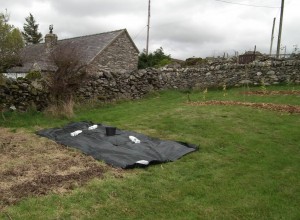 Weed Matting by the Comfrey Bed

On this last bin I used my Mantis Tiller to break up the compacted compost and grass clippings which all get thoroughly mixed together by the process. It’s lovely stuff once it’s churned up and goes into the storage bin next door to await usage.

In hindsight I think I would have been better building more slightly smaller bins, 3 feet by 3 feet instead of 4×4. The reason is that it’s a stretch to the back of the bin when loading or emptying so I end up stepping in to it which makes it difficult to use the spade.

Finally I laid some weed suppressant matting down by the comfrey patch. I’ll be extending the patch next year and the matting will kill off the grass and any weeds ready for me to cultivate next spring prior to planting.

Leave a Comment Here on From Greenhouse to Compost Cancel reply