Visiting Down the Lane

We’ve been away for a few days, taking a much needed break. They say all work and no play makes jack a dull boy and John was definitely becoming a dull boy, chained to the computer 10 hours a day 7 days a week!
We called down to see our good friend Richard Cannon who runs the down the lane website. Richard’s quite famous, having been on Korean TV amongst other things, as he downshifted from the exciting life as a marketing manager for the railways. Goodness knows what would make a man want to give up marketing, but he did.

He makes his living now with a variety of odd jobs and working for Kent cricket club. Sadly I know nothing about cricket but he gets to meet all the stars of the sport. Anyway, we’ve now seen the famous corporate HQ for down the lane. Eat your heart out, River Cottage! The nerve centre looks remarkably like a small shed in the garden but inside is desk with a two screen computer, chair and a heater.

The connection to the internet is .. interesting! Overhead cables in pipes snake around the house, I think the design is by Heath Robinson. Still it works fine. 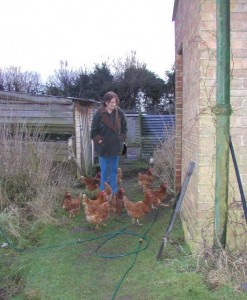 Val and the ex-battery hens

Richard keeps a flock of ex-battery hens in the garden. He’s built the housing himself from scrap wood and palettes. It may look a bit rickety but it does the job and keeps his hens warm and safe. What amazed me was how tame and friendly the hens were. When you consider the first year of their life was spent in a tiny cage and they would probably never even see the keeper as the automated system conveyor belted the eggs in one direction and the food in.

Val went into the garden and over they raced with that wonderful waddle hens have to see who she was and, more importantly, what food she might have. In the end Richard had to distract them with a bowl of food as otherwise we’d have kept tripping over them.

Richard was explaining the history of ‘down the lane’ and how the converted worker’s toilets now makes a useful outbuilding for him. We met his famous cat, Big Ron, who is quite the largest domestic cat I have ever seen. He’s not fat, just a small and really friendly puma!

Richard’s intending to move his vegetable growing into containers so we had a chat about that. Container and deep raised beds are certainly easier if you’re pushed for time and if you’re not as young as you were, although Richard is at least months away from being popped into the OAP’s home! (Sorry chum, couldn’t resist!)

The only drawback was the drive home. It was snowing in the frozen south (minus 1.5C according to the car) as we headed off. Driving up the motorway with the flakes rushing at the windscreen in the headlights is no fun but as we got north of London it eased off and began to warm up.

Then to Banbury where we had the worst meal ever at the services. Although I thought they were 24 hour affairs, most of it was shut at 10.00pm and the restaurant (hah!) had one baked potato left. Val had that with cottage cheese that tasted vinegary if not rancid. I had the mechanically recovered meat torpedoes deep fried in rancid oil with chips (not too bad), fried egg (OK) and stewed for a month baked beans.

We tried to wash the taste out with incredibly overpriced bitter coffee before gratefully heading back on the road where we had a good moan. Moto services, they should make bankers eat that food.  If we could have bought a packet of crisps it would have been 10 times better and even at the inflated prices of service stations, cheaper than the £15.00 we threw away on that excuse for food.

Back home in the early hours of the morning to a balmy 7 degrees! 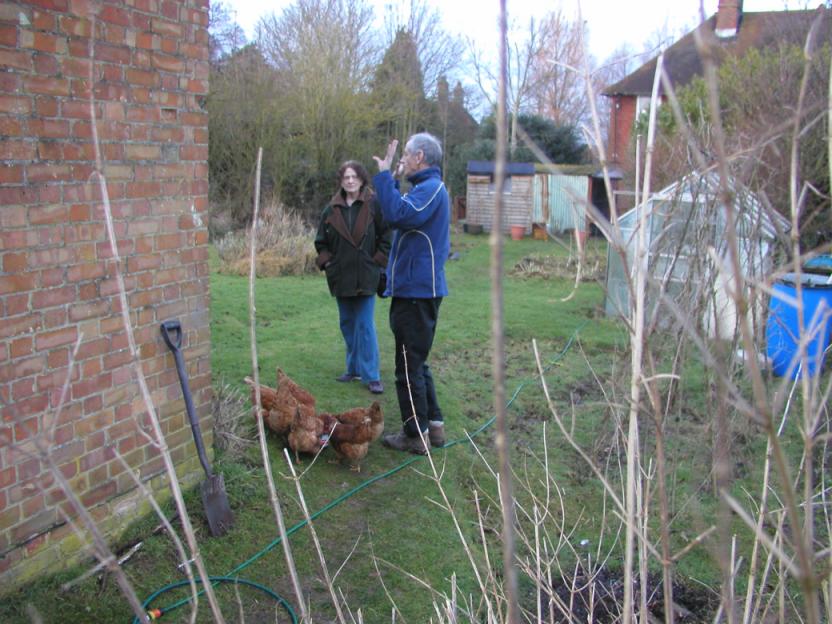 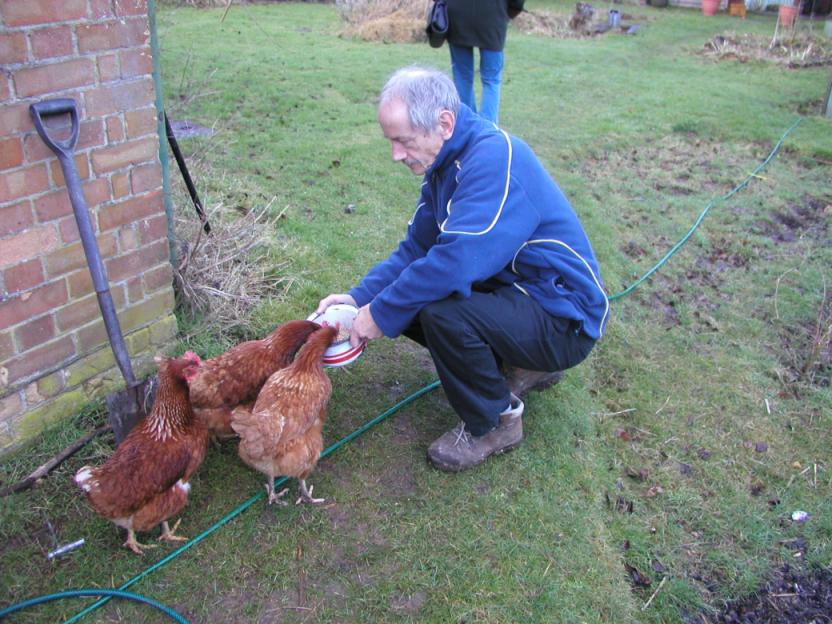 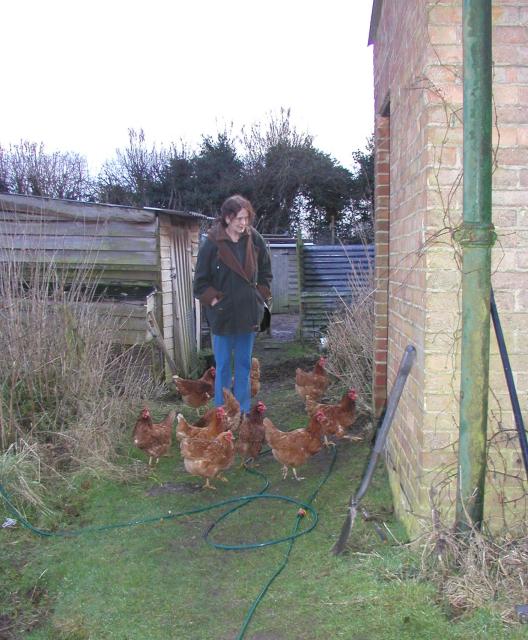 Val and the ex-battery hens

Leave a Comment Here on Visiting Down the Lane Cancel reply