It’s been more than usually mad so not much time on the plot in the last couple of days and what time I had was mainly spent watering. Looking at metcheck we may have a bit of rain in the next couple of days but the amount predicted won’t even cover evaporation.
The top of the soil is pretty dry although there is still some moisture a few inches down. If this weather continues I expect they’ll decide to ban hosepipes and we’ll have a real problem

The dozen show onions came out of the cloche and ten of them went into a deep bed on plot 29. The other two looked a bit ropey, one was misshapen and the other looked ill.

The rest of the Ailsa Craig went in on plot 5 at the top end by the red onions. I like to spread things around a bit in case some disease strikes. Last year some blight hit onions in one place but the rest escaped in different parts.

Apart from a bit of weeding that’s all I’ve managed to get done for now. It’s surprising how quickly time seems to fly, already we’re into May and I’ve not finished my April sowings. On the other hand, I’ve a feeling the ten tons of compost will mean a much easier job next year as the soil will be far easier to work. 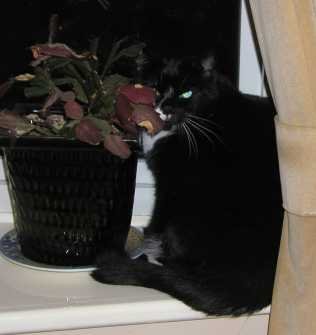 Since Mr Cigs passed away, Claudipus has been lonely. He goes into the garden and wails at the places where he used to pass away the hours with his best pal. So we thought that a new friend could help him fill the void. Our daughter heard of an 8 year old cat in need of a home because his human is off to the states so we said yes.

It’s only been a few hours and he’s pretty unhappy about the state of affairs although Claudipus looks happy to see him and our female, Aphy isn’t bothered. He expressed his upset by giving me a scratch but it didn’t bleed too much.

He’s apparently not been outside his house so the garden is going to be an adventure for him. His owner said he eats a tin of cat food and some biscuits a day plus he’s partial to cheese. This probably explains why he’s grossly overweight so a diet and some exercise is going to be the order of the day.