Having spent a load of time over the weekend learning how to extract a clip from a DVD and publish it on the web, I spent all of Monday putting the National Vegetable Society’s DVDs online. I mean all of Monday.

They’re really aimed at serious show growers but there are tips in there for anybody looking to produce superb vegetables. I’m looking forward to watching them rather than tracking timelines and suchlike.

It’s more like July then the beginning of May and we’ve had no rain to speak of for ages so it’s out with the watering can and the hosepipe. I’ve a water barrel butt on plot 29 that I use to fill the can although I fill it with a hosepipe. It’s useful when other people are using the taps and saves hauling the hosepipe around.

I tend to maximise the benefit of the water barrel by adding SM3 seaweed extract to the water or comfrey tea so I water and feed at the same time. It’s surprising how much water falls from the sky. Half an inch of rain puts 2 and a third gallons of water per square yard onto the ground. That’s about 700 gallons on a standard allotment.

When you sow or plant and the soil is dry as it is now, draw your drill as usual and then water generously into the drill. Let the water soak in and then sow or plant.

I planted out 60 red baron onions from modules onto plot 29 and a few more than that of Ailsa Craig onto plot 5. I’ve still got about 30 Ailsa Craig to fit in somewhere and about a dozen special show onions to go in somewhere as well. They’re in 3″ pots and are more than ready to move on. I’ve also got a dozen of those in 5″ square pots in the greenhouse. I’ve not been too sure where to go with them but I’m going to watch an NVS DVD on the subject. I probably won’t be entering the nationals but I might just have something worthy of a local show.

Progress on the Plot

The peas came out of their cloches today. They’re big enough to fend for themselves in the big wide world and too dry under the cloche so they got a good watering.

The Jerusalem artichokes have finally popped up as well. Just a few leaves but I suspect they’ll be shooting at a rate of knots now.

The first and second early potatoes have pushed through the compost after being earthed up. I may just add a little more. It’s a hard life being a potato. You start shooting and then you get dropped in a trench and covered with soil. So you force your way up to the surface, grow some leaves and along comes a rotten gardener who puts more soil on top of you.

As well as watering I also gave them a feed. I’ve got a barrel of comfrey tea made with the last cut of comfrey last year so about three buckets per row should help them along. John Bebbington, who grows champion potatoes, told me that the biggest mistake people make with potatoes is to assume they don’t need feeding, especially half way through their growth.

Talking of comfrey, it’s about ready for a cut. Jake commented on my entry with the comfrey photo and I tried to explain how to propagate comfrey. Having realised it is harder to explain than show, I’m going to try making a video about it. This massive blockbuster starring Russel Crowe (I will have my comfrey in this life or the next) and Robert Duvall (I love the smell of comfrey in the morning) should last about 3 minutes. Cast list to be confirmed.

The photo below is the cloched sweetcorn. I’ve another 3 rows still in pots waiting to grow on a little more before planting out. 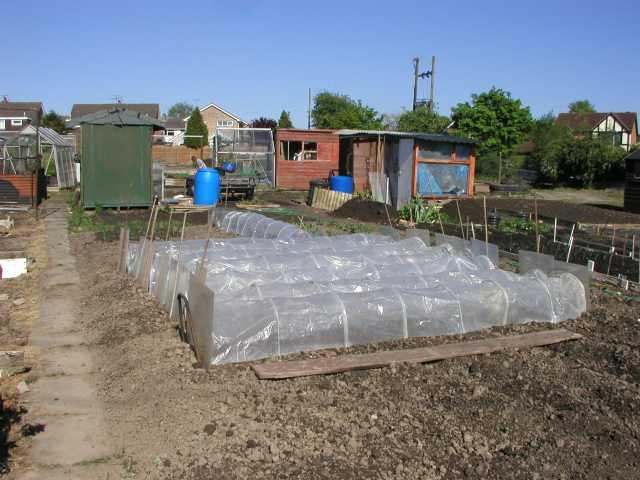