Despite the weather man’s predictions, Saturday wasn’t too bad at all so I got the first of the new raised beds in position. It’s fairly level and square but probably would have been better for two of us working on it. Val was otherwise engaged though so I manfully struggled along on my own.

Once it was up I thought to start on the second bed but I was missing two planks. The only things I could think had happened is that I’d either ordered wrong or picked up two planks less than I thought when we got the wood.

As it happened, on Sunday I found the builders had moved the missing planks to the working area. I’ve no idea why but I’ll ask them on Monday. Still, it’s nice to know I’m not cracking up! 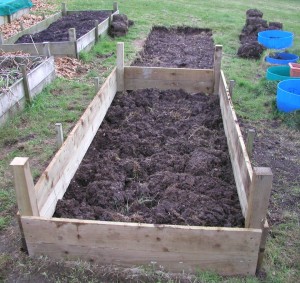 Raised Bed with upturned turves in

Having got the first bed set up, laid the turves upside down in the base and broke up the soil by chopping with the spade. I’m afraid adding the loam and compost will have to wait for another decent day.

Meanwhile, Val cleared the last of the aubergines and sweet peppers from the greenhouse along with some of the tomatoes. It’s beginning to empty now and won’t be long before the rest of the tomatoes come out.

Sunday was, as predicted, wet and windy. Not awful but certainly not the weather to entice you to the plot. Finished an article I’m writing for a magazine and nearly finished my newsletter which goes out on Tuesday. Quite a productive morning.

Service for the Merry Tiller

The afternoon was spent on the Merry Tiller which was in dire need of a service. First of all I gave the engine and frame a good clean. I know it’s a bit daft but I always feel a clean machine runs better than a dirty one. Around the levers that control the throttle on the engine I cleaned off the oil and exhaust soot with an old toothbrush and petrol. The petrol works well to dissolve the gunk but it’s probably really dangerous, especially if you’re smoking!

Once cleaned and the petrol evaporated, which took as long as it took to drink a cup of tea, started her up and ran the engine for five minutes to warm up the oil. I drained off the oil which was very dark and dirty. Thinking about it, I don’t think it’s actually had much attention for 3 years!

A modern engine is quieter, produces less emissions and uses less fuel. It also spends half its time in the shop being repaired as the sensitive carburettor gums up if the fuel is a couple of months old or the air filter or fuel filter gets a bit of dirt in it.

The 1976 Merry Tiller starts every time (near enough), it’s just grateful for any fuel no matter how old and although it’s thirsty and dirty roars along with unbending tines through rocky soil. We actually made some decent gear in this country even if our car industry was a joke in the 70s.

Having drained the oil, the next job was to drain the chain transmission. This should contain a pint of oil but only a little trickle of mucky oil came out. Oops! I poured a pint of oil in, replaced the plug and trundled the rotavator outside. It started second pull after I remembered to pull out the choke. It’s running smoothly again and hopefully will give me another trouble free year.

Back in the house where the aroma of cooking vinegar and spices was quite strong as Val was making an aubergine chutney. It’s based on a hot Indian pickle recipe but without the hot. The first taste was very promising but we won’t really know for a few months how the mature taste will be.