Having got the greenhouse up, the next thing is to fill it up. Yes, I know I’ve not slabbed the floor yet but I’m rarely accused of being logical! 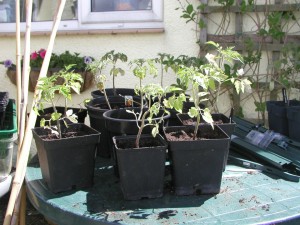 To grow on or to compost? That’s the question!

With not having a greenhouse and all that’s been going on, I’ve not got any seed-grown greenhouse plants. A pal up the road had mentioned he’d got a lot of spare tomato plants so that was one thing off the list. Aldi’s had some really decent peppers, cucumbers and aubergines so we picked up a couple of cukes, couple of sweet peppers and an aubergine.

I’m not growing chilli peppers this year as we’ve enough dried peppers to last a decade in the cupboard.

Well, my pal arrived with some leggy and sickly looking tomatoes which were still in modules. They’d have been better for potting on about six weeks ago. My heart sank but the mouth smiled and uttered thanks.

My first instinct was to give them a decent burial in the compost heap but decided to see if I could rescue the best specimens. I looked at the best of the bunch after potting on and still think the best thing for them is a quick death. Still, plants are wonderful things and you right them off at your peril.

One tomato grower used to leave his plants for ages in 3” pots before planting on into their final home. He reckoned the plants had a lot of pent-up energy and would zoom ahead of more gently treated ones. So maybe my 6” seedlings will put on a couple of feet in a couple of weeks. And pigs might fly. 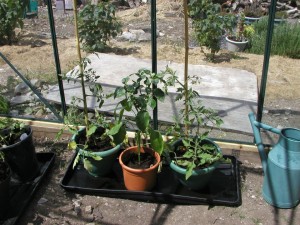 Sungold and a Sweet Bell Pepper potted up in the greenhouse

Today we went out and tried the local nursery but all they had left in the way of tomatoes was a forgotten strip of 3 plants that looked worse than those at home. B&Q’s offerings were a little better but not exactly tempting. Picked up a couple of Sungold from them but I’m not holding out too much hope for them.

As luck would have it, we decided to drop in on Tyddyn Sachau garden centre. We’ve had plants from them before and they’ve done well. Well we were in luck, they’d a selection of tomatoes in 3” pots for just 99p. OK, they’re more than ready to move on but otherwise the condition is really good.

I got Ailsa Craig, which is my joint favourite with Sungold tomato, a Shirley and a couple of Alicante. Ailsa Craig has that real tomato flavour which makes it well worth growing in my book even if it is a little more susceptible to problems like greenback than more modern varieties.

Sungold is the super sweet yellow F1, too sweet for cooking with but great with salads and almost like a sweet for the kids. Shirley and Alicante both have the RHS Award of Garden Merit, as does Sungold. You can read brief descriptions of the varieties here: Tomato Varieties.

As soon as we got home, I side-shooteded and potted on the tomatoes into large pots – recycled flower selling pots from Morrisons. When potting on tomatoes, don’t forget to pot them deep so some of the stem is covered, even a couple of inches. The stem will produce more roots and this helps the plant take in enough to really produce well. 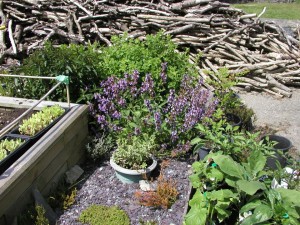 Sage flowering in front of Lemon Balm and Black Peppermint

They’d got a really nice selection of herbs in stock as well so we’re expanding our herb garden. Picked up Welsh onions, fennel, hot oregano, a golden thyme, lemon verbena, parsley and chives.

The herb garden is generally doing really well in the hot weather, I think the slate mulch helps a lot by holding the heat in the day and releasing it at night. Despite this long spell of dry, hot weather, the soil is holding a lot of moisture under the mulch.

Leave a Comment Here on Filling the Greenhouse Cancel reply