The weather seems to be favouring us in the west for a change, the sun actually shining in a blue sky! We’ve been taking the opportunity to get outside as much as possible.

The only problem is that the weeds are growing so fast I’m tempted to test the soil for steroids!

Well that’s not quite the only problem if I’m truthful. Having been working in the sun without a hat, I found myself getting quite dizzy so sat down under the shade of a parasol. A glass of the amber nectar hit the spot and, being really quite comfortable, I rested my eyes for a moment that became an hour.

That wouldn’t have been a problem except my legs weren’t in the shade and were now lobster red beneath my shorts. Luckily just a bit sensitive rather than really burnt but it could easily have been worse.

The greenhouse is basically done, up and glazed. The bit I really hate is fixing the glazing seals to the frame before glazing. It’s a bit fiddly, time-consuming, very boring and you don’t see much for the troubles. On the other hand, it’s vital to stop the glass rattling and breaking.

The important thing is that the structure is rock solid and fixed firmly to base. If this one goes in a storm then I’m stumped so I’m going to add some additional bracing. The winds here have been known to hit near the 100mph and that’s above the design specs for the house.

Hopefully, if I can keep the structure from flexing too much, the glass will stay in and all will be well. The wind will pass over and around. I’ve some lengths of L shaped aluminium which I can drill holes through and fix horizontally along with some of the bracing struts from the old greenhouse to fix at an angle.

I’m flooring the greenhouse with slabs leaving a border down one side. In an ideal world I’d have laid the slabs before building the house but hindsight is a wonderful thing. I’ve got some spare 2′ x 2′ heavy slabs for one row and then some 18” thin slabs for the rest of the base.

I’m sure they’re making the 2′ slabs heavier nowadays, nearly kills me shifting them!

Whilst all this has been going on, Val’s been keeping the decorative up to par. She adds colour to the front of the house with pots and troughs stocked with bedding plants. We tried hanging baskets the first year, but remember those winds I mentioned? Didn’t quite work out! 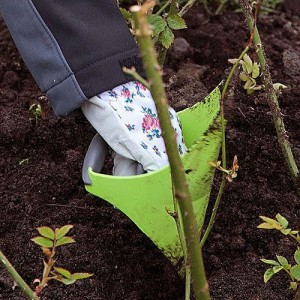 At the back we created a border that’s looking quite mature now with a number of different bushes and perrenials plus some bedding plants in the summer. She’s using a new tool called a Handigger from Two Wests which is ideal for border work and large containers.

Normally we’re pretty sceptical about gizmos and gadgets, they get used once or twice and then sit on the bench until we admit it was a mistake but this one is actually very useful.

The pointed side is great for digging a planting hole and the flat side for scraping soil back. It’s even useful for a bit of handweeding.