Got down to the plot today for the first time since Tuesday. We’d undertaken one of our Viking raids, planned by Val with ruthless military precision, on northern France and Belgium.

We travelled on the tunnel for the first time rather than a ferry. I must admit, it was fantastic. An easy drive down meant we got there an hour early but the system just put us on a train an hour earlier. A slight delay whilst CSI Kent dusted the car for explosive residues and I resisted the urge to shout “Keep down, Osama!”. They really don’t have a sense of humour, nor did they do the windscreen and check the oil.

An easy run off at the other side, straight onto the A16 and past those really nice French allotments I’ve never managed to photograph. Imagine stopping on an English motorway with a very narrow hard shoulder and getting out with a camera. Probably survivors will be prosecuted.

We did follow a Google Street Maps car driving along with it’s tower mounted camera for a bit. Don’t know if that means we’re immortalised on Google maps yet!

One slight problem the next day, we overslept so I didn’t get chance to wander around a French garden centre for an hour as planned. I did pick up a packet of carrot ‘Touchon’ which is a really nice cylindrical carrot and some white onion seeds ‘Tres Hatif de la Reine’

The drive back went pretty well, not only did we make good time but we think we got about 60mpg, which is not too bad. Only thing was we found our air conditioning wasn’t working. The old car had a sun roof but this doesn’t and it was sweltering both ways. I’ve discovered that you need to have the gas in them re-charged to keep them working and now it can do a fair imitation of a fast freezer. Probably be the last hot day of the year now we’ve had that fixed.

We’d been a little worried about leaving our elderly cat Claudipus. The vet gave him two weeks to live some 3 months ago but he’s not ready to go. Mind you, he’s on a special diet – whatever he wants including free range chicken, double cream and turkey – so he doesn’t want to leave just yet. Happily he was just fine with the neighbour looking after him.

Unfortunately Mr Squeak had been battling with another cat, we think the dreaded Oscar from the back, and had a nasty bite wound to his head. How he lost a fight, I don’t know – giving him his antibiotics he certainly puts up a good battle.

Anyway, back to the plot. I left with a comment that I wouldn’t be long, just going to water the greenhouse. Famous last words. Loads of ripe tomatoes to pick and new sideshoots to remove. A lovely large cucumber and a pepper for tonight’s salad as well. There’s a lot more about to ripen as well. Some of the cayenne peppers are reddening as well.

Gave everything a feed and then a good watering, just in time. All was not so well in the brassica bed on plot 29. I’d weeded around the bed on Monday but not in-between them. The weeds had shot up and worse still, a lot of the calabrese had bolted. Next year I think I’ll revert to growing Chevalier, which seem to have better heads and hold longer.

The sweetcorn is doing really well, as good as any on the site I think. I always seem to do well with sweetcorn. It’s funny how some things I have a knack for but others I struggle with.

The borlotti beans are developing well, with a good bit of sunshine they should be nice. The runners are coming on as well, expect we’ll be harvesting those very shortly and the second sowing of broad beans are about ready to harvest too.

Loads of courgettes, of course. I knew three plants was two too many! Couple of cabbages ready and still more potatoes to harvest. No peace for the wicked grower.

Photo Below: The borlotti beans are coming along nicely. 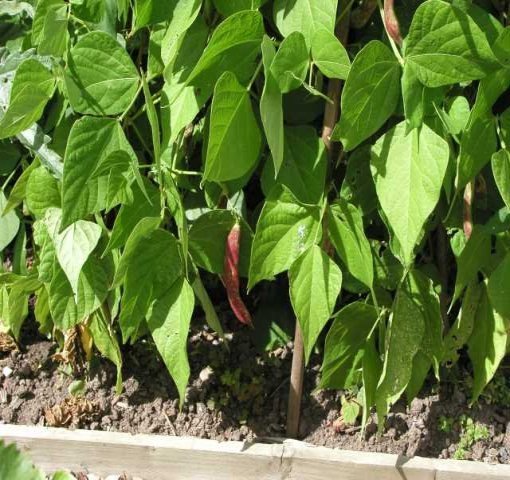 2 comments on “Back from France”

Leave a Comment Here on Back from France Cancel reply