By Sunday afternoon the drizzle and rain had decided to stop so we had the monsters family round for a barbeque. Despite the heavy grey cloud, it didn’t actually rain until the night but the nieces and nephew were a bit disappointed that there were no cherry tomatoes for them to pinch. They did find some strawberries though, which made an adequate substitute.

We’d pulled out a couple of corn on the cob, frozen last year, which went down well. Talking of barbeques, Andy and Clare on the site had a barbeque some time back where they cooked banana with Twix in silver foil as a pudding for the kids. Might not be Jamie Oliver’s favourite but the kids seemed to love it. At least they ate some fruit.

Monday we didn’t get a break but today we headed for the plot in the afternoon. Normally Val has the garden and I the allotment but at this time of year it’s all hands to the pump.

My job was weeding and Val was harvesting. A nice bag of peas, courgettes, broad beans, carrots, a few tomatoes, cucumber. Weeding the peas is a bit tricky, don’t want to pull a pea plant up with them. Looks a lot better now and hopefully they won’t be smothered.

I also dug up an Anya potato. Rather pleased to get about a kilo from one plant and no damage. Last year was terrible for blight, I remember spreading the Anya’s out on sheets on the lawn, sorting the rotting from the good and washing them to try and save what I could. We’ve had a few smith periods this year but, fingers crossed and touch wood, no blight as yet.

The rest of the Anya are coming up next along with the garlic and shallots. I’ve not done very well with onions this year but the shallots and garlic are rather good. One year, I’ll win them all.

Took a wander around the site and a couple of photographs for my gallery – see Allotment Photographs. On Lee & Karen’s prize-winning plot the peas are looking fabulous. Jealous? Moi? Larry’s plot is looking rather good as well, celery wrapped to exclude light, leeks in tubes. I think the NVS is having an effect on him and next year he’ll be growing six foot carrots for showing.

On my own plot, the globe artichokes are looking really quite amazing. No sign of actual artichokes yet, probably next year, but they’d make a great architectural plant in any garden border. The climbing beans are looking good as well. Overall, quite pleased with things this year.

Just one thing, if you’ve not done so already, please sign the petition against the Aminopyralid herbicide that’s devastating so many plots and gardens. It only takes a minute and we need to get the government to realise the seriousness of the situation. It’s no use just moaning to other growers – go and sign up now. 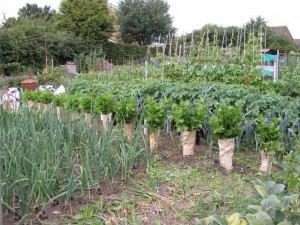 2 comments on “Some Sunshine!”

Leave a Comment Here on Some Sunshine! Cancel reply