Popped down to the plot late afternoon. The weather felt like it was going to rain but you never know for sure so off I went. Yesterday, when I planted out my outdoor tomatoes, I’d intended to fit some old milk containers into the matting to allow me to water and liquid fertilise the plants. Unfortunately the quality of plastic 2 litre milk containers and pop bottles is not what is was. Far too flimsy now. So I cut the bottoms off some old plant pots (we’ve far more than we’ll ever need) and fitted those in. Looks well and does the job.

Next I planted out some leeks. I’d tried a new method with some by starting them in modules rather than deep pots and then planting the modules in a trench and earthing up to blanch the stems.

These were planted using my normal method of dropping the leek into a dibbed hole and watering in. Since they’re all in the same area, I can compare results accurately. My feeling is my new method will pay off but you never know.

Whitefly in the Greenhouse

Back over to the greenhouse where I planted the rest of the marigolds Val has grown for me into the border. They are supposed to deter whitefly and they look pretty anyway so why not.

The whitefly are already there though on the peppers. So, a second line of defence is put into action. Yellow sticky cards are hung on wire over the peppers. The whitefly, and green and black fly, are attracted to the colour and land on the sticky surface.

I’ll keep an eye on the peppers and if need be, spray but that’s the last resort.

Did hoe the bed first to knock out the tiny weeds that were popping up. I’m beginning to find hoeing immensely satisfying.

Not all wishes come true!

I then started to prepare the brassica bed on plot 29 and the rain started. Strangely I was thinking we could do with some rain to soften the soil when it started. As I sheltered with Larry in his polytunnel, I thought we could do with a gorgeous Swedish blonde to keep us company. No such luck. Mind you, with my luck, the Swedish blonde would have been named Sven.

I went home but the rain stopped after a bit.  Whilst some parts of the country are getting so much rain they’re flooding, we’re actually quite dry.

Photo Below: The plum Roma tomatoes and the watering pots. More Photographs 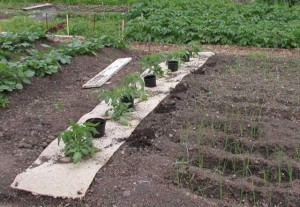