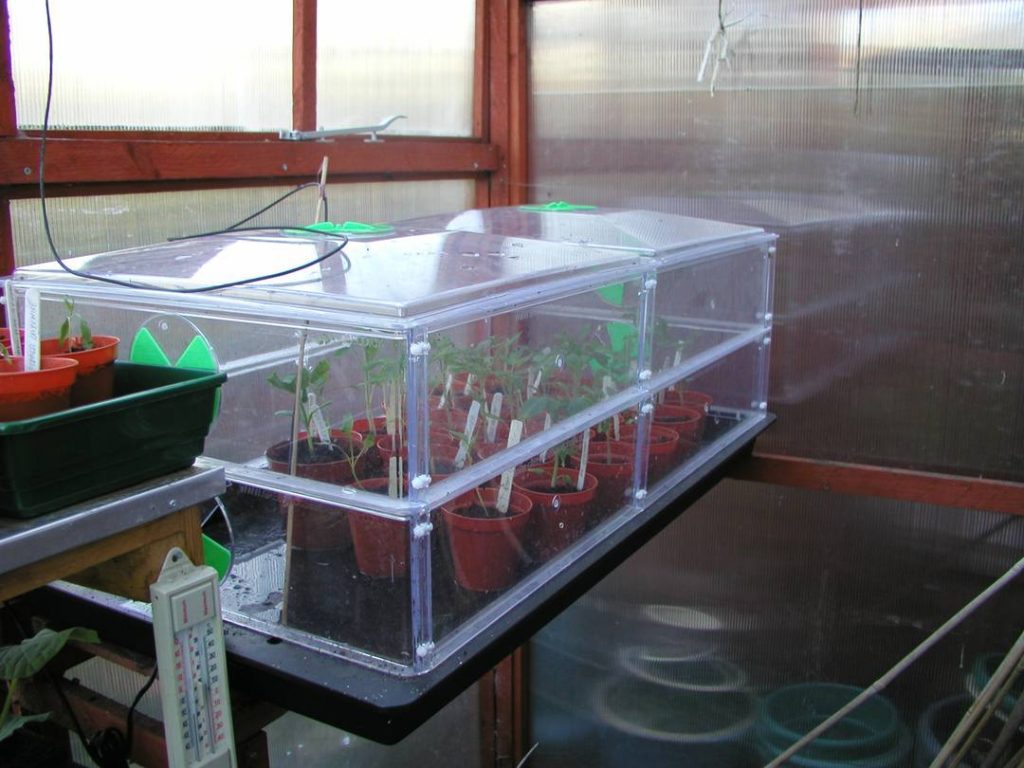 I reckon when a chap reaches half a century plus a little, he deserves a few indulgences and so I’ve been treated to a Vitopod Propagator! A slightly late arrival for my birthday.

The next bit, and I love this, is the height. Most propagators are fine for germinating seeds but once the plants start to grow you’re in trouble. The leaves push the top and the plant bends and is squashed.

The Vitopod base is a solid, heavy plastic tray about 2″ deep with clear UV stabilised Perspex sides about 6″ high and the lid is slight domed. This gives just over 8″ growing height which is about the same as most other propagators. Now, this is the clever bit, you can get additional side pieces and place one onto the other giving an extra 6″ of head room. So now I can keep plants up to 14″ high in there.

In fact, you can buy the side pieces separately so adding another 6″ or even 12″ is feasible. If you’re over-wintering a tender plant you can avoid heating a whole greenhouse, just the propagator.

The base draws 100 watts so it’s powerful as these things go, useful if the weather springs a surprise and temperatures plummet. I’ve got a couple of cheap electric propagators but they have two drawbacks. First, they’re low powered at 20 watts and half the size of my Vitopod so equivalent to half the Vitopod’s power. In really cold nights, they still can’t hold temperature. Secondly, the other electric propagators are uncontrolled. When they’re on, they’re on and after the cold night, the sun comes out and warms the greenhouse resulting in cooked seedlings.

The Vitopod comes with a very flash thermostatic controller, it’s designed for aquariums and terrariums where people keep reptiles. So it switches on when below temperature and off when it’s warm enough. No more cooked seedlings. This enables a nice minimum to be maintained and saves electricity, of course.

Another problem with many propagators is lack of ventilation. A damp humid atmosphere is great until moulds develop. On both of the short side pieces there’s a controllable vent built in and the same in the lids.

My only criticism is the assembly instructions. I expect they’re good enough for most people but I’m useless with this sort of thing. I managed to put the sides together inside out, but it only took a few minutes to realise and fix my mistake.