Back to the Future – Clipstone Allotments

I went over to Clipstone Allotments just outside Mansfield  today  for their open day. The event was officially opened by MP Paddy Tipping at 1.00pm but when I got there just before midday, the site was already thronging with visitors. 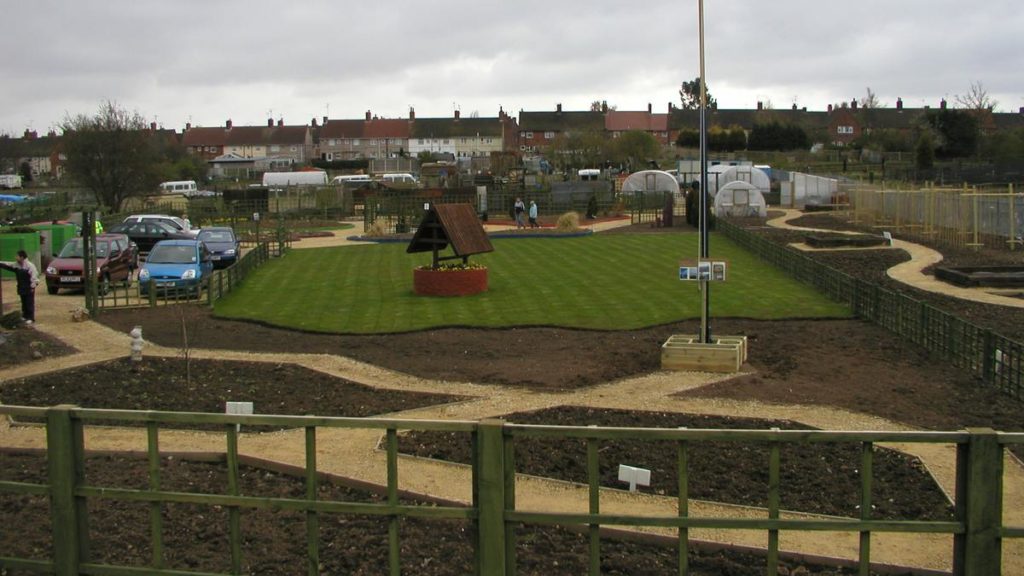 Unfortunately the weather was really against them. It was freezing cold with a bitter wind and spitting rain but that didn’t seem to have stopped people coming.

Apart from the weather, I think the day was a great success and enabled them to showcase the improvements made to the site over the last few years. I thoroughly enjoyed it, even if I hadn’t thawed out by the time I’d got home – and it’s a 2 hour drive!

There was a cold buffet laid on, with delicious egg sandwiches made from eggs laid by hens on the site amongst other things, a hog roast and burgers / sausages for something hot. My only criticism was I’d have killed for a hot drink! Or a hot water bottle.

The site has about 200 plots, so pretty large, and is privately owned via the Industrial & Provident Society. 5 years ago the site was pretty derelict and heading in the wrong direction but a new committee has really turned things around.

They’ve raised a lot of money – about £150,000 from the Coalfield Regeneration Trust, Co-op Dividend, Awards for All and others to fund the effort. Although they need the money, without the will and effort to get things done, nothing would have happened and the enthusiasm of everyone I met on the site was obvious.

One area of the site used to be a dump for an army base and chatting to some of the members, they told me they’d spent a fortune on skips to dispose of the rubbish they’d removed from the soil.

Strategic Training Solutions who are in partnership with Garibaldi College and other local schools within a l0 mile radius to provide training for over 120 youngsters on a weekly basis, have an area of about 10 plots that they’ve reclaimed and utilise. Many of the children have learning and other difficulties. The children are obtaining NVQs and City & Guilds in horticulture as well as developing skills and a sense of community and self confidence.

Sherwood Children’s Centre is in partnership with the Allotments to deliver planting and nutritional advice to youngsters throughout the Spring, Summer and Autumn to around 40 nursery children on a weekly basis from both local schools.

It’s been converted into a garden with lawns, ponds, vegetable beds and landscaping. I loved the skull and crossbones flag flying, apparently it came from the local colliery.

They’re selling hanging baskets, bird boxes and produce raised in their polytunnels and greenhouses built from reclaimed materials. There’s plans in the future to offer training in cooking the food they grow and develop an awareness of healthy eating. They’ve even built a shelter from scrap materials, very professional it looked as well. I wish I could build as well.

One area they site really seems to have scored on is this co-operation with the greater community. Children from local community and schools are coming along from just three years old to visit and the schools have 7 – 8 year olds as coming as part of their curriculum.Allotments have traditionally been strongest in deprived areas where those on low incomes could supplement with their own food but the skills of growing have been dying out and allotments have been changing to a middle class hobby in some areas. This emphasis on involving and teaching children means those skills are being revitalised and ensuring that the allotments survive everywhere, especially those areas where they can do the most good.

I chatted at length with a couple of ordinary plotholders. One was saying how he had feared the site would close until this regeneration initiative. The plots are quite large, I’d guess about 13 poles on average but the rents are low, £11.00 pa plus site maintenance and water rates taking it to £19.00 per plot.

One chap apologised for it looking a bit like a shanty town but to me that’s the charm of allotments. Recycling everything from corrugated iron to plastic sheeting, He mentioned they’d had a fair bit of asbestos sheeting that had had to be cleared from the site and that some plots had been fenced with old conveyor belts from the coal mine. Trust allotment holders to find a use for anything and everything. 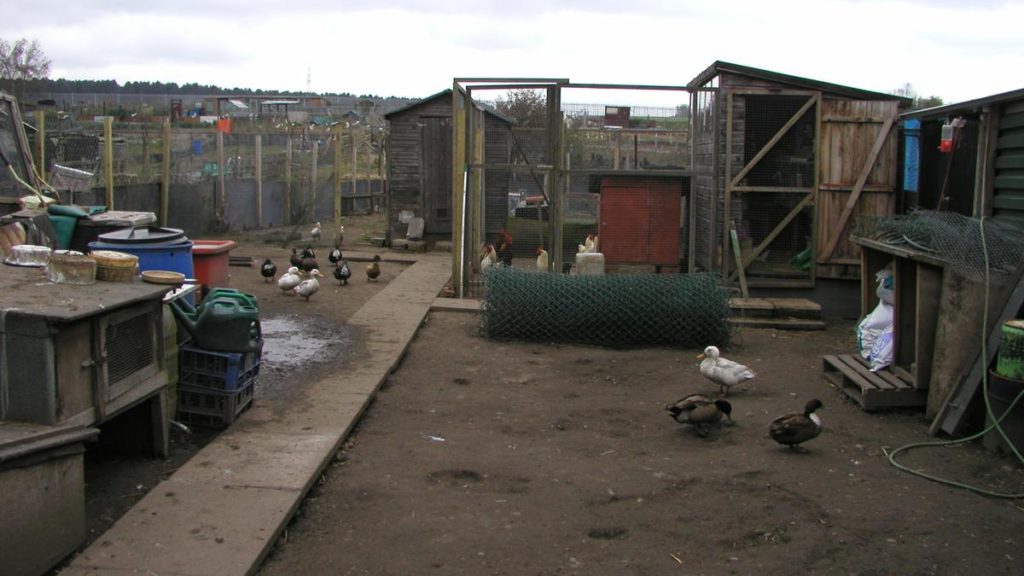 A plot of ducks

They don’t seem to have too much of a problem with vandalism and theft, the bane of many sites, but I got the feeling they’re not free of it either. Hopefully the integration of the site into the younger community is helping in this.

The bit I really loved about the site was that the plot holders almost do what they will on their own plots. Some had properly constructed brick built structures, not allowed on many sites, and most had sheds etc, one even a workshop.

They’re also allowed to keep livestock on the plots. Now as you might know we had a fight locally about keeping a few hens and my name is still mud with some on our allotment committee because of my promotion of this. Well these guys had hens, ducks, geese for starters. One plot had pygmy goats! Lovely little creatures even if they insisted on hiding whenever I pointed the camera at them. Caught them in the end. A couple of plots had horses, I kid you not – horses! Fantastic. 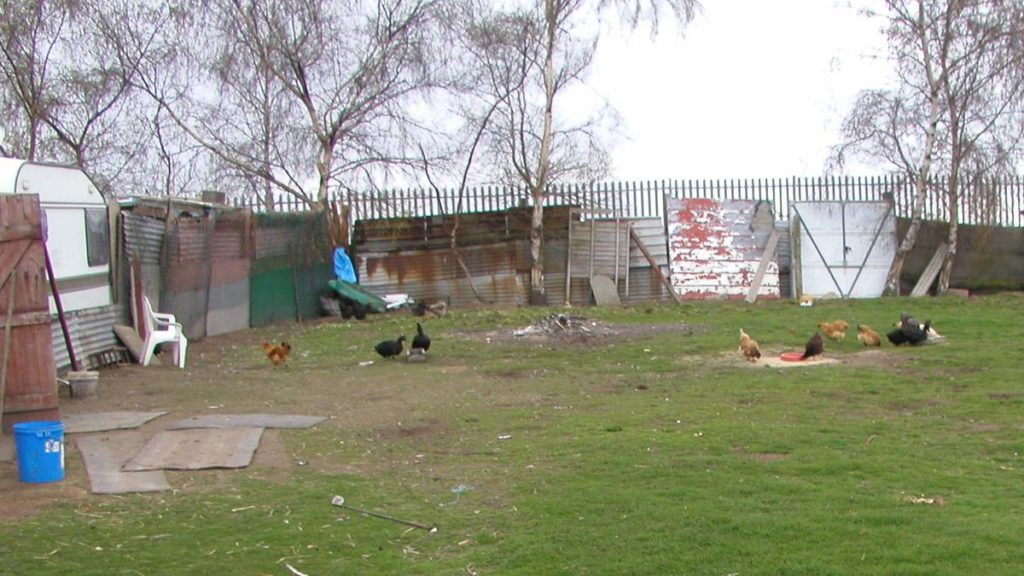 Ducks and Hens ranging on a large plot at Clipstone

I was told that one chap used to raise pigs and slaughter them on his plot years ago but EU regulations have stopped that.

To me this is the a real allotment site. A community of people all doing their own thing but looking out for each other. I can see it going from strength to strength thanks to a committee with the drive and guts to look outside the box and make the allotment a true resource for all.

Jenny Weaver,
Tarn Hows,
Station Road,
Clipstone,
Mansfield,
Notts
NG21 9AQ
Telephone 01623 641978.
I’ve put the photographs I took up on this months Allotment Photos – the one below is the pygmy goats going around their plot. Do take a look at the rest, fantastic site. 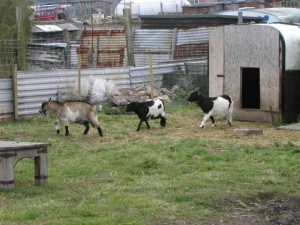 5 comments on “Back to the Future – Clipstone Allotments”