You might recall I picked up some compost made from green waste from the Moelyci environmental centre. Well they had an open day last Sunday so we popped along. Moelyci was started in 2003 when an upland sheep farm became economically unviable and was destined to become a holiday home complex.

Backed by the EU and Welsh Assembly funding it now conserves the natural heritage of the land with 250 acres having SSSI and SAC status. It provides courses, a market garden, pick your own and has about 50 allotments on the site. 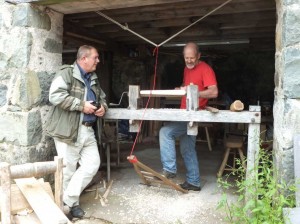 When we arrived the first person I had a chat with was Mike Bithell who was demonstrating a pole lathe. He’s a green woodworker and coppice craftsman who demonstrates and runs courses at Moelyci. It was quite fascinating seeing how simple but effective traditional woodworking tools are. There were some simple benches he’d made that were absolutely gorgeous. Their beauty came from the wood itself and working with the grain.

Next we took a wander up to the fruit field. Anyone who grows currents knows the biggest problem is the birds eating them. Their solution is rather elegant, leaving some strips of grass which attracts small mammals like mice. These attract hunting birds like kestrels and buzzards which in turn deter birds like pigeons that would happily munch the crop.

After the fruit we went down to the allotments and had a chat with a lady on there. The site itself seemed a bit more make-do than most, which is saying something with allotments! (That’s a compliment and not an insult, by the way) A large patch of nettles would not have been tolerated on the site at Crewe!

However, that large patch of nettles provides a reservoir for wildlife and nettles cut and immersed in water provide a feed similar to comfrey liquid. Although I’ve not seen a proper analysis of the nutritional content of nettle liquid, users swear by it.

The plots cost £20.00 a year and are around 200 square metres, which struck me as pretty reasonable although I couldn’t see any mains water and some of the plots are on a steepish slope. Being as I’m growing on slopes and a similar stony soil, I was interested to see how they coped.

There was a large pile of stones that the lady had removed from her plot but some were coming back in to form paths. The soil had obviously benefited from the availability of the green waste compost and the plot was terraced to make good use of the slope.

The conditions were kinder than I enjoy, being just 300 feet above sea level against my 600 feet. I think the large number of trees in the area helps calm the winds and that’s another part of my plan here, lots of trees and shelter belts. 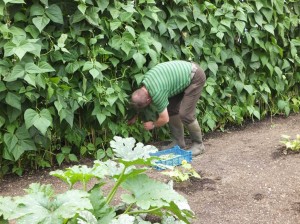 Next was down to the market garden area. Now I was really jealous here, massive polytunnels with multiple spans. A row of climbing beans was about ten feet high and in full production. My beans have yet to start up the poles!

The tomatoes growing in the tunnel weren’t as far along as I expected. In fact no further than mine in the greenhouse. I felt they weren’t making the most of the space, being quite a distance apart but I suppose when you’ve a lot of room you tend to use it.

All in all, a thoroughly enjoyable visit and I picked up some ideas and inspiration for my own vegetable plots. At least I know it’s possible to make it work in these conditions!