It’s not been the best week’s weather, but at least the weekend was reasonable although Sunday was really windy. We do seem to be having March weather in May after having had May’s in March. The good news for some of the country is that there has been enough rain to remove the hosepipe ban although not in all areas. Not that water shortage seems to be a problem in Wales! I do prefer to use rainwater to mains water though and am happy to say my butts are full.

Incidentally, many suppliers are out of stock of water butts but Harrod Horticulture have good stocks and fast delivery of the Harcostar 50 gallon butt, which they’re offering with a free rain trap.

My vegetable plot is in a grass field and the grass is growing well so my first job was to mow it. Now I’m looking at the grass as a compost material source. The one thing I need in large quantities is compost. This first cut was a right old job, even at the highest setting there were places where it choked the mower.

Having run over the field twice, I ended up with a huge pile of clippings. Now grass clippings alone  do not a compost make. If you’ve ever tried, then you’ll know you just end up with dense smelly mass, soured silage. Grass clippings will compost well but you need to mix them with other materials.

Ideally, with soft sappy materials, you want woody materials to balance them out. Torn up cardboard and paper will work but I’ve something even better coming. Shredded hedge trimmings, which I’ve masses of as well. Add in a little lime, activate with a high nitrogen liquid and it should heat up fairly quickly.

The other requirement for good compost in fairly quick time is to aerate and mix. I’ve a couple of large plastic bins, which do work fairly well if you just leave things for a year or so. However, to add air and mix, I need the traditional square and open fronted bins. To mix the contents of one bin are forked into the next.

Incidentally, for smaller quantities of compost, a tumbler is brilliant. So long as you don’t overload them and remember to turn them daily. You can turn waste into good compost in just a few weeks with a tumbler.

My bins could be constructed with old pallets, as I did on the old allotments but they don’t last that long and so I’ll trade off some time and money now for a long lasting bin and buy some tanalised timber. I’ve costed out for four 1.2M cube bins, side by side and think they will cost about £170.00 That’s a lot of money but cheaper than buying ready-made bins by half and they should last at least 15 years.

The bins are going by the old and very overgrown hawthorn hedge just up from the shed with a comfrey bed in front of them. That’s where the first lot of clippings to shred are coming from, the old hedge. So far it’s been eight hours of wielding the chain saw and dragging away branches and I’m only half way through.

When I had the allotments in Crewe we used to get bulk compost delivered in large skiploads. It was made by a farmer who handled the green waste for the council under contract. I contacted Steve Edwards at Gwynedd council who collect both green and food waste to ask if they did the same. Well Steve gave me a call and told me they were giving away compost on Saturday in Pwllheli so I popped down with my neighbour and we collected two bags apiece.

It’s made, (I hope I have this right) in an in-vessel digester and also incorporates food waste. Anyway, he’s actually offered to show me around the facility in Harlech, so more on this soon. Hopefully I can persuade them to sell me some in bulk as it looks to be really good stuff.

Some Firewood and a Lot to Shred for the Compost 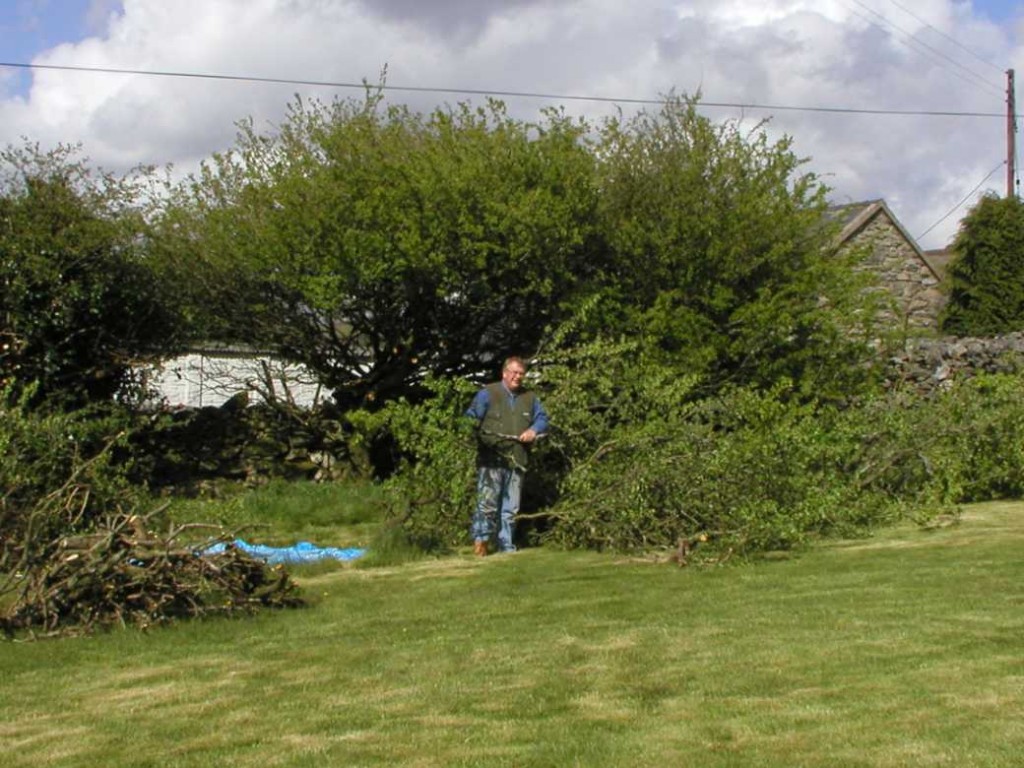