Having got the wood for the raised beds, we thought “Why make life easy with just one project?” So it’s on with the path up to the orchard and tree planting at the same time as well as starting to get the seasonal sowing started. 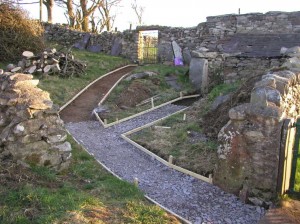 The path is in two parts, the main part goes up to the orchard with a small branch off to the old pigsty that will be a storage shed one day. We’ve got it dug out, the boarding to the sides is done and started adding the base which is slate waste. This is being compacted using a whacker plate (sure there’s a proper name for it) before we start mixing concrete.

The sloping areas will just be slightly ridged concrete which will help us get up and down in icy weather but I’ll set sheets of slate in the flat areas. Basically we’ve loads of slate just lying about and it will look nice. Very in keeping with the Snowdonia approach of “why use other materials when we’ve got slate?”!

I’m going to need about a cubic metre of concrete, maybe a bit more, so we’ll be using a cement mixer. Bit too much to do by hand. There’s an article on constructing concrete garden paths on the site.

Although the timber is treated to stop it rotting, where it is cut becomes a weak spot. The treatment only penetrates a little way into the wood, not the whole way through. So I’m dip treating the cut ends. We’ve an old cat litter tray which is ideal. I pour a couple of inches of preservative in and then stack the timber in that for half an hour.

It’s amazing how the timber sucks up the liquid, the brown colour goes about 6″ up the posts. Once they’ve dried I’ll be ready to start building them.

One tool I invested in that is so useful is a cordless drill / driver with a lithium battery. It’s nearly as powerful as the mains drill and the battery lasts for ages. My old cordless was dying after half an hour’s use. I stocked up with screws from Screwfix which are rather good as you don’t need pilot holes, they just slice into the wood, drilling their own hole. Sometimes it’s worth checking what the professionals do and copying them.

There’s a lady in a local village who has a tree nursery. She uses local seeds and her soil is, like the rest of us, poor. So the trees tend to do well, being not just native but acclimatised to this area’s soil and climate.

Anyway, it’s getting to the end of tree planting time so it’s now or next year (effectively) and collected:

Because the last thing you want is the roots drying out in this warm weather, they all went in an old bath full of water to keep them healthy. The willows are quite large so they went in first. Apart from a little bonemeal in the bottom of the hole and breaking up the soil with a fork, no soil improvement. The lady from the nursery warned that the worst thing I could do is molly coddle them with compost!

The ash are going in to the top of a field with the birch. The idea is that the ash will eventually be coppiced for the wood. So it’s a grow your own fuel project. Birch isn’t so good for burning, but they’re nice trees and should shelter the copse.

I staked where each tree is going, roughly 8′ apart in two staggered rows and sprayed the grass around the stake with glyphosate. In a week, when the grass is dying back, I’ll cut it low and then plant the trees. They don’t like competition around the roots at this stage.

I’ve found a neat trick for planting trees (well my neighbour suggested it) where they don’t have much root. A post hole borer. It’s not the way the pro’s would do it but it works for me!