Saturday was just unbelievable. It hit 22 degrees here and the whole day was simply gorgeous, sunshine and blue skies. A true summer’s day.. except this is March. Oh well, don’t complain, we’ll probably have snow in June. 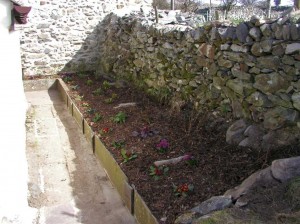 At the back of the house we’ve a path with a raised border to a stone wall as the land slopes down to the house. The side of the border was tilted over and falling onto the path so that’s been dug out and the sheets of slate set in concrete at the base. Then the border was dug over with about 30 barrow loads of excess soil carted away around the corner.

One of those ‘little’ jobs that takes ages. Still, once done it’s done. The soil was really acid and poor so it’s been limed and had soil conditioner mixed in. A dose of general fertiliser along with some slow release shrub fertiliser should have brought the fertility up to something like.

Val had a number of shrubs in pots which have gone in along with a load of primulas and various other flowery things. Finally topped off with bark chippings (cheap at Lidl) to suppress the weeds. The whole border was done except for the last four feet which runs onto a sloping patch of grass that’s about a foot higher. To step it up I needed some sort of wall and the one thing we have an abundance of is rock. 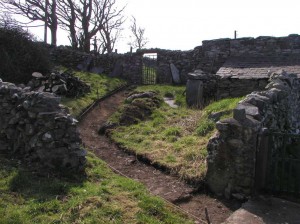 I’m laying a path up the slope to the orchard at the moment. In wet weather it becomes a ski slope so a ridged concrete path will make getting up there a lot easier. Digging out for the path we’ve discovered what might have been a cobbled area or even a path originally. Left alone the grass and moss grows over and eventually buries these things. Anyway, we had unearthed the perfect rock for the wall at the end of the border.

The rock was very rectangular, I think it must have been shaped at some time as a lintel but as to how it ended up where it was is lost in time. Just over a yard long, about 9” by 6” and solid granite. I managed to lever it up on one end but how to get it to the border? Val brought the wheelbarrow over but we couldn’t get it in. After some thought we got our sack truck and walked the stone onto that.

Trucked it around to the border and with some heaving and, I must admit, a few magical invocations using Anglo-Saxon words that cannot be printed, it was finally in place. Up to now I’d been feeling quite good but the exertion brought on a ten minute coughing fit. I’m sick of this cold! Anyway the border is finished and looking very neat if a little sparse. In a couple of years it will be filled up, no doubt.

After a double tea break it was on to the next job. The track up to the house has a grassed area to the side. A lawn is not really a description, it’s just poor pasture that has a load of moss in it. Last year we planted 4 goat willows in there, which look a little lost but at least seem to have taken and Val planted a load of daffodil bulbs which are giving a nice display.

With fertiliser in spring and summer and lime in the autumn and some scarifying, eventually it will be lawn, but not yet. We picked up two mountain ash, Rowan trees and a decorative almond so they’ve been planted between and behind the goat willows.

For each one I dug out a square about 18” to each side and a foot deep, taking the turf off which will end up turning into loam. The soil went into the wheelbarrow and was mixed with the soil conditioner (rotted bark and manure) and the bottom of the hole forked over and more soil conditioner mixed in. I also removed a load of fist sized stones which got dropped into gaps in the dry stone wall.

In with trees, spreading the roots and making sure the soil was filled in around them. A stake to stop the wind rocking went in and the tree was tied to the stake with pieces of old tights (thanks Val). Why pay out for special tree ties when old tights can be had?