I’ve always taken growing our own vegetables seriously. There have been times when the contribution of ‘free food’ to the household budget has made the difference between us coping and not. 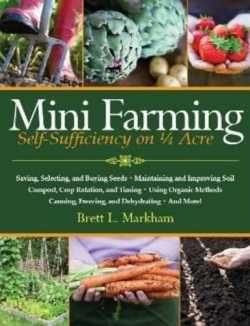 So I was really intrigued to see a book entitled Mini Farming with the strapline Self-Sufficiency on ¼ Acre by Brett Markham. It’s an American book, published by Skyhorse who also publish our How to Store Your Home Grown Produce in the USA. Mini Farming is available in the UK via our Constable & Robinson at all good bookshops as they say.

I’m always a little suspicious of American books, they seem to get hung up on systems like square foot gardening and just a bit too intense and self-publicising for my taste but I managed to wangle a complimentary copy so settled down for a read. I’ve been under the weather for a few weeks with a rotten cold that’s turned into a full blown chest infection so I’m not up to taking much advantage of the recent good weather and curling up with a book was about all the exertion I could cope with.

Well, I’m really glad I did curl up with this book. Pretty early on, Brett Markham gives an economic argument for growing your own that is factual and well thought out. I knew then that this was a man after my own heart. Yes, he obviously enjoys growing and being self-sufficient but his feet are firmly on the ground.

Then I read “Up where I live in New Hampshire, any attempt at digging, no matter how modest, can be difficult because of the large number of rocks encountered. Did you ever wonder where all those picturesque rock walls in New England came from? Yep – they came from farmers getting rocks out of their fields.”

As someone trying to grow in Snowdonia on rock, I know exactly what he means! He’s obviously more taken with raised beds than I am, I think they’re often counter-productive but we totally agree on how to build them generally. I particularly liked his suggestion for building beds on soils difficult to dig and shall be taking that onboard.

There are things in the book that I’m not so sure about, like using artificial lighting to get seeds going early. It’s a bit energy intensive for my money, but that’s a niggle rather than anything major.

I was aware of was that he was often coming at things from a different angle to me, which was enlightening. I’ve always put my effort into promoting NPK and lime to achieve a reasonable pH but Mr Markham makes more of micro-nutrients and calcium. He even gives a recipe for a micro-nutrient chemical mix.

Mini Farming is not just a vegetable growing book though, he covers some preserving methods and keeping chickens for both eggs and meat. Beyond that even, he gets into selling produce to generate some cash income although I think he’s missing the trick of adding value as promoted by Hugh Fearnly-Whittingstall, like turning fruit into jams etc.

OK, in the USA there’s a lot more land and, outside of the big cities, houses tend to come with far more land than in the UK. A friend of mine who emigrated some years back casually mentioned his house there had a ‘back lot’ of an acre. But even in the UK, if you’ve a largish garden and an allotment there’s a lot you can pick up from this book.