Saturday was a bit of a dead loss. The weather’s not too bad but I came down with a headcold on Friday night and hardly slept, which left me operating like a zombie. Best I managed for the day was to curl up with a hot lemon drink in front of the telly and doze off and on through a video.

Just to add to the fun, in the evening the electricity went off. I muttered about solar storms, coronal mass ejections overloading the infrastructure, Protons sleeting through computer chips and the end of civilisation.

Before I could get too far down the road of preparing for life post-apocalypse, fighting off the starving hordes from the cities, Val pointed out the lights were still on in Caernarfon and an hour later the our lights were back on as well.

Did get some sleep on Saturday night and whilst not feeling 100%, I was well enough to get back to greenhouse construction after lunch. Val came out to help but our neighbour showed up, freeing her to play with some flowery things!

This was the part of the construction I thought would be really problematic, but it turned out to be very straightforward. The four pre-assembled sides were linked together and whilst you could do it with two of you, it was easier with three of us as the sides flop around until they are bolted together.

The ridge bar was a bit of a fiddle but once that was in the whole thing felt a lot more rigid. Next were the glazing bars in the roof and the cross bracing. After those went in the greenhouse was rock solid.

When I first spoke to Greenhouse Stores I explained I needed a large greenhouse but that it had to be able to resist strong winds. We’re 600 feet up on a hillside with a clear view to the Irish Sea, just 5 miles away and when it storms, it really storms.

They recommended the Vitavia Jupiter against other makes and models as they felt it was one of the strongest on the market. Well, I can’t argue. Most greenhouses flop about until the glass goes in and makes it solid, not this one – it’s like a rock already.

By 5.30 pm the clouds had come down so whilst the rest of the country basked in the sun, our temperature dropped to 8 degrees and the mist sucked the warmth from us. We’ve still got the doors to build and the base to fix followed by putting on the glazing bead and glazing the house.  Here’s my neighbour commenting it isn’t watertight yet! You can see the mist is coming down, it got a lot thicker later. 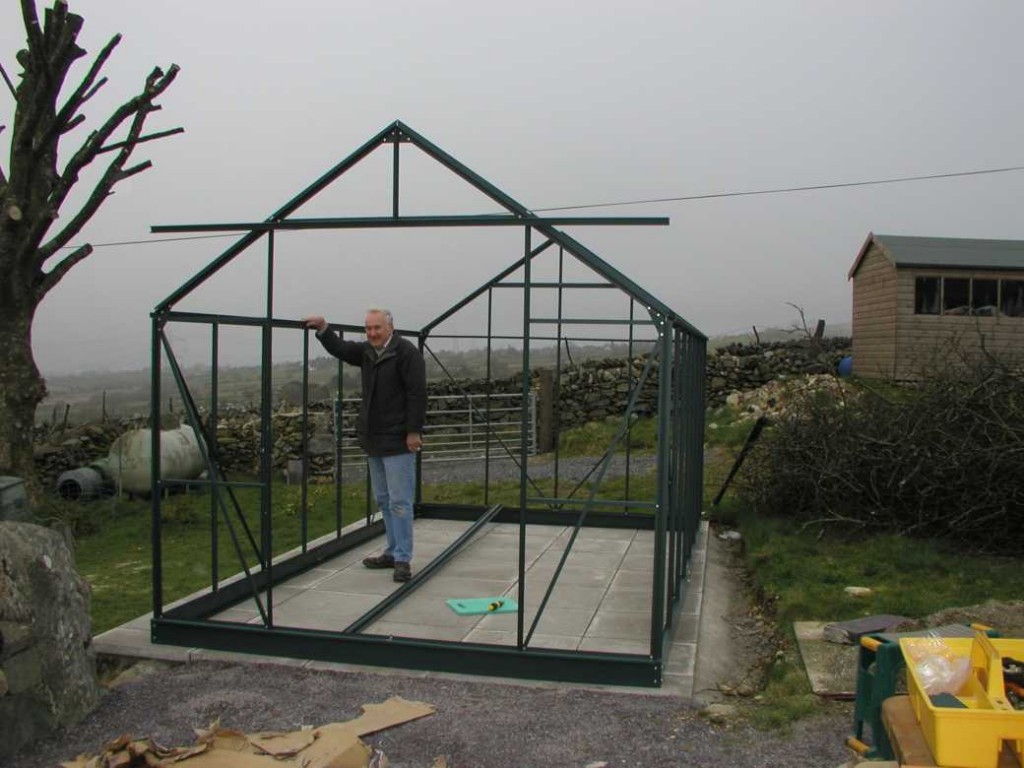 2 comments on “Constructing the Greenhouse 2”

Leave a Comment Here on Constructing the Greenhouse 2 Cancel reply