Yesterday I thought I’d head down to the plot for an hour, so put my jumper on by which time it had started raining. OK, change of plans and stayed in. Today I was determined to get down there. The weatherman said it was a sunny day, so despite the odd drops of water falling from the sky, I headed for the plot.

The first thing that greeted me on the site was the path corner, this is now impassable unless you have wellies on. Now I’ve moaned about people driving to their plot before, churning up the path but this is actually the fault of the electricity people. 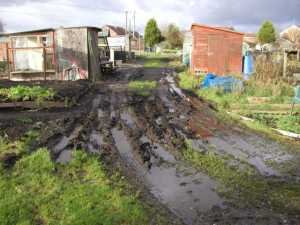 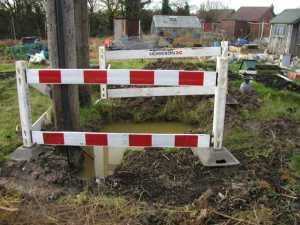 We’ve got some electric lines that cross the site and then disappear underground on one of the plots at the top. Well last time it needed some work, those wonderful people (United Futilities I think) just cut the lock off the gate to gain access rather than contact the site rep for the key. Never actually said sorry or paid for the lock either.

This time they managed to ask for the key (although the clever money is betting it never gets returned). So up to the pylon they go and dig a big hole, about a metre plus deep, dumping a pile of clay onto the plot it’s on. Then away they go.

Next some more chaps arrive to do something with the cable and amazingly find the hole has filled up with water. Shock!

So away they go and after a bit more men arrive and pump the water away. Off they go and leave the hole to fill up again. So when the men arrive to do whatever it is they have to do with the cable, it’s full of water again. Shock!

Anyway, apparently they have now fixed the cable higher up on the pylon so all this digging and back and forth has been for nothing. I assume they’ll come back and fill the hole back up sometime soon and with a bit of luck they’ll do something about the path.

Anyhoo, as the young and trendy people used to say, back to what I went for, building the compost bin. I was more than a little hampered by the wet mud, managed to slip and end up with a muddy seat. Fixed the back panel and outer side panels up, I knew those 6″ nails would come in useful one day. Had to take shelter from the showers a couple of times and that slowed progress down as well.

Managed to cut old shed door up to make the centre panel using my handy battery powered jigsaw. I’m sure I could have done it using the hand saw, eventually, but it’s so quick just zipping across the panel with it.

Well I got the wood cut but yet another shower intervened so I still haven’t got the compost bin finished. I did get to see a wonderful rainbow, a perfect semi-circle from one side of the site to across the road. I vaguely know it’s caused by light refracting through water droplets technically but it’s still an amazingly beautiful thing to see.

The rainbow over the allotment 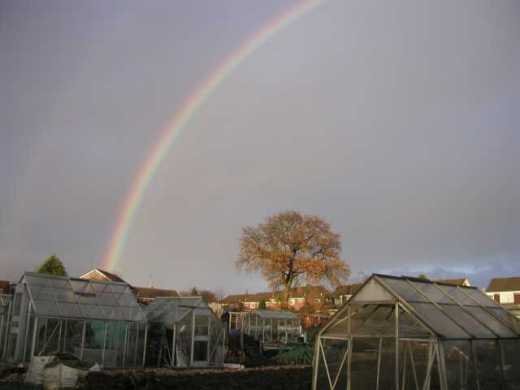