We’ve had a horrible few days. Our oldest and daftest cat, Mr Squeak, picked a fight with next door’s dog and lost on Friday night. Yes, we had a cat that actually attacked dogs but he was a bit scared of mice. 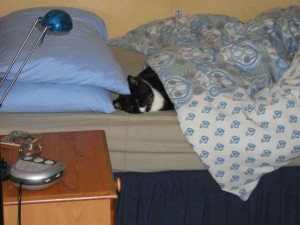 So up to the vet on Saturday for treatment to a bite wound and all appeared well. Then on Sunday he was obviously very poorly, so Monday morning it was back up to the vets.

It turned out not to be anything to do with his fight but a combination of cancer and diabetes. Since there was no chance of his recovering and was obviously suffering we had no choice but to call it a day.

He passed away peacefully with his head on my hand, purring until the anaesthetic took hold. Those of you with loved pets will know how we feel. He’s at rest now under the shade of a tree. A real character who has left a large hole in our hearts.

We’ve a track up to the house with a large border on which we’ve planted four goat willows to start with. More trees and bushes to follow this autumn. The grass has been growing and was about two feet high so it was an afternoon of strimming and raking followed by the lawnmower when it was manageable. Just what I wanted, something that occupied me but didn’t require much thought. 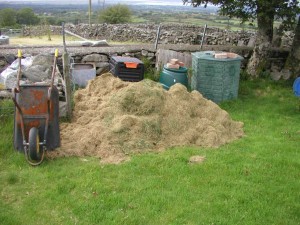 This has left me with a huge pile of grass cuttings by the compost bins which are all full. I’ve a ton of horse manure maturing under a tarpaulin as well. Now one thing that my soil is really lacking is organic matter which is vital for a productive plot. So I really need to generate a lot of compost.

Since the bins are full and I’ve yet to find some pallets to construct some more bins with, I think I’m going to construct a large linear heap. I’ll strip the turf off a bed and break up the soil, removing the larger stones.

Then I’ll just (just??) barrow up all the grass cuttings and partially rotted material from the compost bins, mix in the horse manure and some lime to sweeten in a windrow and basically produce the compost in place for next year.

The stripped turf is being stacked and hopefully will have turned into usable loam for next year. I had hoped to have a large comfrey plot on the go by now, but that’s going to be next year. I love comfrey, it’s such a useful plant to have. I called my comfrey plot in Crewe my compost mine. And if there’s one thing I need, it’s another compost mine!