We went out shopping the other day, an activity that defines the difference between men and women more than any other. One happily searches around the shelves seeking the best bargains and the other trudges along behind hoping for the experience to be over with the same fervour as he would in the dentists chair hoping for the end of root canal work.

So whilst I’m waiting by the checkout, tugging at my lead, I noticed a shelf of onion sets reduced to clear. It’s really not on, planting out onion sets at this time of year is not going to succeed. More chance of a lottery win than a crop of decent sized onions.

That’s not to say everything is going to fail sowed or planted out now. For example, we’re really a little past it for broad beans but by planting a fast cropping variety there is a chance of getting a crop if the weather is kind towards the end of the season. I’ve sowed some Witkiem Manita, which are fast maturing and some of “The Sutton” broad beans, which are suitable for windy spots being small and fast maturing as well.

I’ve sown in pots although they could and should generally be sown direct into the ground. The reason is that the beds have only just been made and I want them to settle a bit, give the rain a chance to wash the added compost down into the gaps etc. Also, since I’m using commercial compost to top up the beds whilst my own is still in short supply, adding extra from the pots will be an extra benefit. Finally, I’ll only be planting out the growing plants so not wasting space on failures.

Next on the list was some peas. Now the way I’m doing these was shown me by a show grower, John Carver, who I met through the National Vegetable Society. Half fill a half size seed tray with compost and tamp down using a wooden plate into which holes have been drilled just big enough for a pea to go through.

The holes in the wooden plate are drilled so that the peas are evenly spaced when it is lifted. Then fill with more compost and water in. Once the peas are showing, the roots will bind the soil in the tray together and the block can be planted out. A variant on starting them off in guttering in the greenhouse early in season.

I’ve sown two varieties of pea; Kelvedon Wonder and Misty. Fingers crossed they both start OK as there’s no time for a second sowing by the time I know how they’re doing.

Carrots go direct in the soil, well compost, in the barrels and a few beetroot are direct into a bed. I used to say crops like carrots and parsnips could not be started in pots or trays and then transplanted until a new grower managed to do it! Now I just say I don’t think it’s the best way and they should not be transplanted. There’s always an exception that proves the rule. 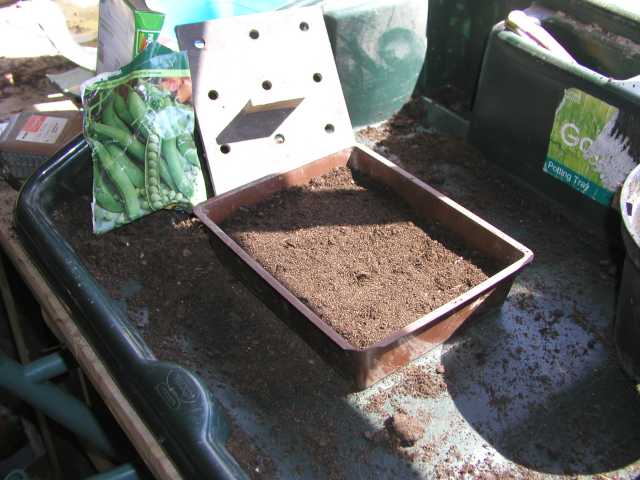 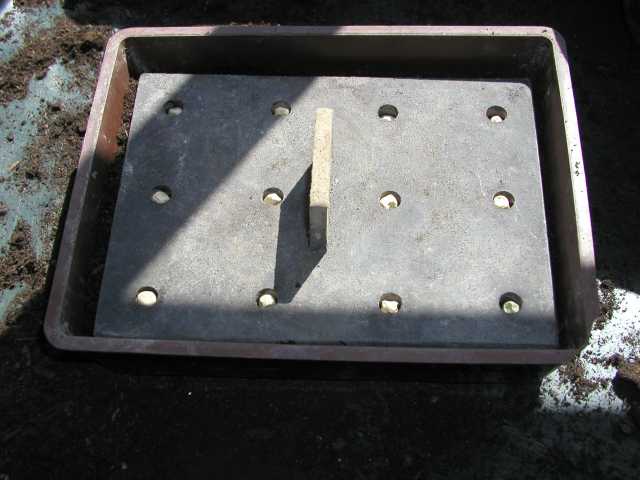 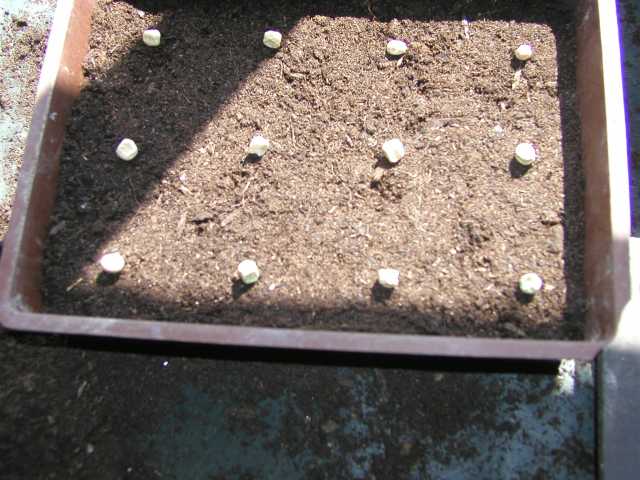