Making Small Farms Work by Richard Perkins has a tag line of “A pragmatic whole systems approach to profitable regenerative agriculture” which neatly explains the core ethos of the book.

The author, Richard Perkins is well known as a YouTuber – he’s got 35,000 subscribers – where he publishes inspiring and informational videos about his farm in Sweden and regenerative agriculture. 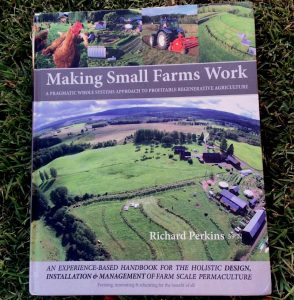 Unlike conventional western agriculture, which I would describe as industrial farming, regenerative agriculture is about producing food in a way that actually improves the environment and particularly increases the amount of topsoil.

Industrial farming damages and erodes top soil. Many scientists are worried that top soil depletion has reached such levels that we could see an environmental disaster in the near future to compete with global warming. There is precedent for this – the dust bowls of the American mid-west in the 1930s.

It’s apparent from his videos and more so from the book that Richard Perkins has an immense knowledge in his field. Although obviously grounded in and influenced by permaculture and organic growing methods, he’s not a theoretical, armchair farmer, blindly following systems. He’s very practical in his approaches and methods.

Making Small Farms Work attempts to cover a lot of ground and for the main part seems to succeed. He starts by contextualising what he’s trying to achieve as a farmer and moves on to how they got the farm where they are now – without winning the lottery!

After this he explains holistic management, looking at all aspects and results of decision making. This is actually a more complex subject than you might expect. Although he covers it well, it’s a chapter I had to read slowly and more than once to begin to understand.

Then he moves through a wide range of topics from mapping and design to grass and grazing including pastured poultry keeping and market gardening, concluding with financial planning.

I have to say this book isn’t what I was expecting. It’s more than that. I thought it would be a fairly dry text book but he weaves the factual information around what they have done on their farm. Relating the theoretical to his practical application makes it more understandable.

The story of how they found and established their farm is interesting in itself. It’s also inspirational. I wish I’d read it 30 years ago – if I had, I might well be farming now. I wonder how many who would like to be small farmers just think it’s impossible to get into and give up before they start. Seeing something can be done is very empowering.

What I really like is that he isn’t running a model farm to showcase his theories, he’s running a very profitable farm and making a good living from it. A real practical alternative to industrial agriculture that young people can get into.

The average age of farmers in the west is around 60. This is because the conventional farming business requires immense amounts of capital to get into. Land prices are bad enough but the cost of the machinery and infrastructure is huge as well. Richard Perkins proves that it is possible for young(ish) people to start up a farm and make it work.

There was one area where I felt it could have done better, the section on market gardening. It seemed a little light to me. He does point out that there are already good books and resources available on market gardening. What he does do well is to concentrate on the basic soil management and business aspects rather than in depth discussions on how to grow a carrot and what varieties to grow.

Who is this book for?

One area I have some misgivings about is the price of the book. At 350 Swedish Kroner – around £30.00 – it is not cheap even for a 320 page hardcover with full colour. It’s only available from the author in Sweden which means an additional delivery charge of roughly £20.00 to the UK. He does offer a PDF download instead which I went for. There’s no discount from the hardcover book price but you save the delivery cost.

For someone who says ‘Farming, innovating & educating for the benefit of all’ I would have thought making it available via the usual mass market channels – book stores and online sellers like Amazon and The Book Depository – would have been a better way to get this valuable information in front of more people, more affordably.

On the other hand, if you’re planning on or seriously considering investing everything into a farm then £50.00 is peanuts. You would be bound to recover the cost many times over.

It’s a work that I think should be in the library of every agricultural and horticultural college. Anyone who wants to farm or is in farming should read this. For someone like me who has no intention of becoming a farmer but is concerned by the way industrial agriculture has developed, it’s a ray of hope. Things can get better.

You can obtain Making Small Farms Work by Richard Perkins via his website – www.ridgedalepermaculture.com