Some differences between Spanish and British allotments

By Dick Handscombe who have grown vegetables for a combined 120 years since the age of five including on mini plots, school vegetable gardens, allotment size vegetable gardens and eventually a 800 square metre allotment in Spain where they have lived for twenty years.

This article examining the differences between Spanish allotments and allotments in the UK is in two parts. The second part is Spanish Versus British Allotments Part 2 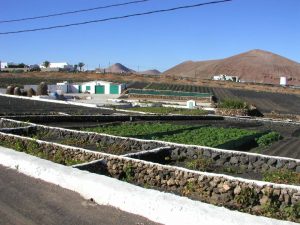 Do allotments exist in Spain?

Unfortunately the English style allotment rented from an allotment association or town hall is not a well established tradition in Spain although a few farsighted villages and towns are starting to set them up.

However there is an ancient tradition of growing vegetables on small plots ‘huertos’ outside villages and towns that were laid out and worked by Moors during their 800 years residency in Spain.

As Spain was re-conquered much land was reallocated to monasteries who lent it in parcels to Moorish Muslim and Christian families to work on a crop saving basis. This practice continued until the monasteries were dissolved in 1836.

After the dissolution of the monasteries the land was sold off with some rented out for the growing of crops for sale as well as family use. However after almost two centuries of large families, marriages and inheritances today’s land holdings can be just half, one or a few henegadas (833 square metres). Incidentally in a Spanish family a wife does not inherit the house or land these going immediately to the children who are often told at a young age which piece/pieces of land are allotted to them in wills so that they can work them from an early age.

However many Spaniards have decided during the last ten years that growing vegetables is no longer economically viable or is too hard work and instead have planted the areas up with fruit trees – often citrus trees which in time have also become uneconomic so many are now being abandoned or sold for the building of houses where arable land has or is likely to be reclassified as urbanisable land.

It has, therefore, become possible to buy, rent or just borrow for the provision of a few vegetables the equivalent of the English allotment.

Luckily the two of the four huertos/allotments adjacent to us are still used by Spaniards who see the sense of growing vegetables to have fresh harvests 365 days a year. One by a mixed age group on borrowed land as we do and by a 91 year old working his own land – as he has done every week of his life for 85 years! Of the other two one is abandoned and a source of wind blown weeds and the other still a an active orange grove.

How large is the typical Spanish allotment or huerto?

Typically a little over 400 or 800 metres, as land was originally parcelled off in henegadas (833.3 square metres) with some being split into two. This is therefore very similar to those in the UK.

How are they irrigated?

Many allotment/smallholding areas are still irrigated by the two millennium old method of flooding – the water coming though channels, tubes and siphons under roads and streams for up to a couple of kilometres on order – for instance 15 minutes –from a spring or pump house. We use the former during dry winter spells and the latter during summer months.

To facilitate flooding our 28 metre wide plot has a 40 cm high wall with nine circular holes for irrigation purposes along it’s breadth and is therefore split into 10 strips. The first of three metres is for a line of compost heaps and barrels of steeping comfrey and nettle. The rest we split into nine strips with raised mounds of earth between.

We will typically ask the pump man for ten minutes of water every two weeks during late winter/early spring if it has been dry and fifteen every seven to ten days during the summer…unless of course it has rained. Life would be much easier if we had piped water and a drip irrigation system but after ten years of using the system it’s no hardship.

Are the growing seasons different?

We live on the Mediterranean Coast – 400 metres up and 14 kilometres from the coast. Since we are on a south facing slope frost is normally not a problem so we can have sixty percent of the soil fully planted throughout the year taking advantage of the two springs – spring and autumn –to grow two or more crops of things like carrots, potatoes, broccoli, onions, lettuces etc.

By the way broad beans and peas are planted in the autumn for February to early May harvests.

The other forty percent is fully used in the summer when we grow expansive squash and melons. Were we on the north facing slope of our valley, the reduced hours of sun and sometimes heavy frosts would reduce significantly what we can grow during the winter. Likewise if we were on the high inland plain or in the north of Spain.

In the far south regular temperatures of 40 to even 50 degrees can make it difficult to keep some traditional summer crops growing beyond early July. If we were at sea level we would sow or plant about a month earlier in the Spring.

The second part can be found here: Spanish Versus British Allotments Part 2