Spanish Versus British Allotments – Different Attitudes to Allotments in Spain

Some differences between Spanish and British allotments

By Clodagh and Dick Handscombe who have grown vegetables for a combined 120 years since the age of five including on mini plots, school vegetable gardens, allotment size vegetable gardens and eventually an 800 square metre huertos allotment in Spain where they have lived for twenty years.

This article examining the differences between Spanish huertos allotments and allotments in the UK is in two parts. The first part is Spanish Versus British Allotments Part 1

What else is different between Spain and the UK for allotment growers? 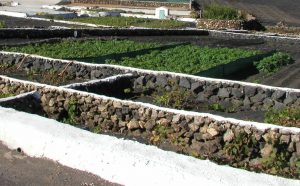 Many agricultural areas in Spain have red or light grey clay soils. The former can bake rock hard during sunny spells all the year round unless irrigated and worked.

The grey soils remain more open and have a greater water holding capacity. This enables crops such as squash and melons to be grown without watering after sowing even under the Spanish sun.

If one takes over a new allotment the soil will normally require a major initial improvement because the traditional annual manuring to lighten and enrich the soil stopped 10 to 20 years ago when the keeping of working mules and donkeys and oxen ceased and the flocks of sheep and goats declined exponentially.

Chemical fertilizers became the norm as villagers became wealthier but are now becoming overly expensive in relation to the prices they can get if crops are sold.

There are fewer types and varieties of seeds available and very few sparsely available seed catalogues for amateur gardeners exist. Traditionally Spaniards grew few types and only the family/village varieties handed down over the generations.

We aim to use organic seeds where we can so save our own seeds where practical, tap into a local government seed bank, use anything offered to us by locals and fill gaps with imported seeds.

Sheep and goat manures were the norm but there are now more horse stables now opening wanting to get rid of manure. Pelleted chicken manure is not generally available but in our area there are many commercial chicken houses where it is possible to buy a few sacks full when they are cleaned out.

However we only use the droppings from our own ecologically/naturally reared chickens (and then only after composting for a year) as we are concerned about the possibility of residual growth hormones and antibiotics in the litter from the commercial sheds …..commercial broilers are now reared to kill in 42 days versus 70 or a 100 only a few years ago!

Fortunately there is now a wide range of eco fertilizers/growth promoters, pesticides and fungicides available to the amateur gardener – possibly wider than in the UK – having been developed/commercialised for the export oriented organic vegetable growers. For interest look up <www.trabe.net>.

Composting needs more care to prevent heaps from drying out. As explained in long chapters in each of our books, the layering of dampened material is essential.

The generally benign climate can lead to long growing and harvesting seasons. For instance leaf crops can be planted out in the autumn and will over winter without going to seed until the hotter weather of spring. Raspberries we harvest on the same canes from May until November and if we are lucky into January.

However one has to watch out for widely yo-yoing daily temperatures and between successive days especially during the winter and early spring. Winter does not change to spring as gradually as in the UK.

Indeed it is possible to experience several winter/spring/winter sandwiches between December and April. We have experienced minus five to plus thirty in that period and summer temperatures up to 47 degrees centigrade although above the mid thirties is unusual except in Almeria and Andalucia where 50 degrees is possible!

We may get less rain but when it comes it can be for days at a time in the spring and autumn and of monsoon proportions. The heaviest days rainfall we have experienced is 67 centimetres in a day with 28 centimetres in an hour! Inland tennis ball sized hail stones can be a problem but the last fell in our village 24 years ago when the cars of the day ended up with badly dented roofs which were still around when we moved to Spain.

See also 30 Ways to Save Water in Mediterranean Gardens

If one asks a Spaniard when he is going to sow or plant out X or Y he will often reply with a saints day or in relation to the current cycle of the moon. The elderly men still keeping up allotments – our neighbour is 91 in a few weeks time and has worked his land every day since the age of ten – were well versed in the rudiments of the lunar calendar.

But as with most, he has no one interested in keeping his allotment going or even helping him out at weekends. So his accumulated historic agricultural knowledge will die with him and his land laid to waste until swallowed up in a future building boom.

The long term vision of our mountain village is that all the current agricultural/allotment land will eventually be reclassified as urbanisable land with the already abandoned olive, almond and grape terraces on the mountainsides being given a ‘preservation’ status allowing them to go back to the primeval state when the first inhabitants moved into caves in the valley 29.000 years ago and started tilling the land on early allotments long before AD.

The need for more allotments becomes more urgent as more and more small scale and large scale agriculturalists cut back or even stop production. What were self sufficient villages now rely almost entirely on vegetables from other areas of Spain and imports.

The reasons are the recent increases in the price of seeds, fertilizers, insecticides, fungicides, herbicides and tractor/lorry fuels as a result of the oil crisis, the low prices paid to growers which do not go up even though supermarket prices do and the allocation of more and more land for more profitable bio-fuel crops to meet the governments objective for more oil self-sufficiency – apparently seen to be more important than food self-sufficiency.

In our area Spaniards find it odd that Clodagh works our allotment for as many hours as Dick however along the Galician coast it is the tradition that women work the huertos/allotments while the men are away fishing or in the navy.

Even without allotments more and more people are starting to grow at least a few vegetables in their gardens or on apartment terraces. To show what can be done and to have photographs for the book we grew eighteen vegetables in a one square metre mini allotment –a collection of plastic tubs and pots – on one of our terraces two summers ago. Where there’s a will there’s a way!

This article examining the differences between Spanish huertos allotments and allotments in the UK is in two parts. The first part is Spanish Versus British Allotments Part 1